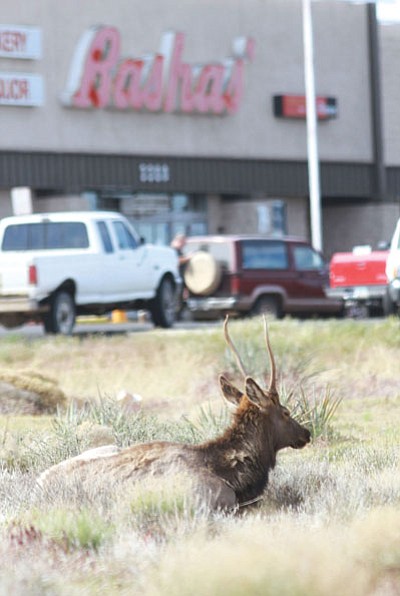 The elk were photographed near Andy Devine and Airway Avenues last April. The Arizona Game and Fish Department then tranquilized and released the elk in the Hualapai Mountains. <BR>JC AMBERLYN/Miner

KINGMAN - The spring has been fairly dry and wildlife may be approaching communities to seek a handout, according to the Arizona Game and Fish Department.

This might appear harmless on the surface, but providing wild animals with food and free standing water is not a safe practice for the wildlife or public.

"I really can't think of a good reason to draw wildlife into close contact with humans," said Zen Mocarski, public information officer for the Game and Fish Region 3 office in Kingman. "Vehicles and wildlife can rarely share the same space without a negative result."

Vehicle collisions account for the death of more than 1 million vertebrate animals a day in the United States, Mocarski said.

"My point is that more often than not, people feeding wildlife aren't helping the animals," he said. "In fact, they are putting them in harm's way."

But collisions are only one potential problem.

"Those feeding can be creating a type of smorgasbord for predatory animals," Mocarski explained. "There was an individual feeding quail. Across the road sat two roadrunners waiting for a meal to come right to them."

"It doesn't always happen, but it certainly can," Mocarski said. "Then these large predators, such as a mountain lion, begin living near humans and become habituated. At that point they can become a danger to people and Game and Fish must consider public safety."

"Of course, some members of the public get upset when such actions are taken," Mocarski said. "This isn't generally about an action taken by Game and Fish, but a problem within a community. This is about changing the general mindset of having to 'help' wildlife. They don't need that kind of help. They will find food and water."

Mocarski said the message is about the overall welfare of wildlife. Predators and vehicle collisions aside, disease issues can occasionally arise and bringing wildlife into close quarters with each other and humans can become a problem.

"Think about a school classroom in wintertime," Mocarski explained. "One child coughs or sneezes in close proximity to others and the disease spreads. The same is true with wildlife. It is better to allow wildlife to naturally forage."

Allowing animals to disperse will also limit the number of human-wildlife interactions.

"One person's feeding passion becomes another person's pest," Mocarski stated. "Javelina can get under houses, root up vegetation, attack pets and cause damage to homes, not to mention the potential danger to the public."

The biggest problem, Mocarski said, is food on the ground.

"You can't feed just one animal," he said. "Few people feeding deer consider the fact that deer are the favorite food of a mountain lion.

"The bottom line is that feeding wildlife is a selfish act. It isn't about helping wildlife - it's about seeing wildlife. I'd suggest those wishing to see wildlife get outdoors and away from their homes. That's when you'll learn what makes these animals special."

For more information, visit azgfd.gov/urbanwildlife. You may also visit Region 3 on Facebook by searching for AZGFD