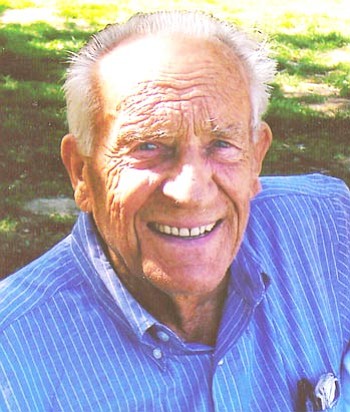 Earl Robert McLeod passed away peacefully at the Redlands Health Care Centre in Redlands, Calif., on Thursday, July 11, 2013. He was 93 years old.

Father, grandfather, great-grandfather, uncle Earl and friend will be lovingly remembered for his trusting, kind and generous nature. Earl's love of God and nature often brought him close to tears in awe and wonder of our beautiful earth and all creatures upon it. His faith and love of God was the foundation upon which he built his life.

Earl was born June 22, 1920, in Minneapolis, Minn., the only child of Alfred M. Christensen and Emma Jane Mothershead. When Earl was a baby, his mother married Lloyd Maxwell McLeod. In 1927, the family moved to Los Angeles. Earl attended George Washington High School, where he developed interests in hot rods and woodworking, passions that served him well throughout his life.

Earl entered active duty in the U.S. Army a month before the attack on Pearl Harbor in 1941. As an aviation cadet, he soloed a Boeing Stearman PT-17 at the U.S. Army Air Field in Marana, Ariz. Serving in several capacities in the U.S. Army Air Corps, Earl was honorably discharged in November 1945, with the rank of sergeant and with decorations and citations for the American Theater and Asiatic-Pacific Theater with one Bronze Battle Star and WW2 Victory Medal.

He married Joan Ethyl Anderson (nee McDonald) in Los Angeles on April 25, 1954, creating an instant family with her son Douglas. The family relocated to Las Vegas, where Earl and Joan raised their family, which now included Terri and Robert, in addition to Douglas. Earl worked as a general contractor and was part owner of a wholesale sheet metal supply company in addition to being a partner in a sheet metal fabrication shop. He was known for his ability to build anything and do it with precision. One of his neighbors was fond of saying of Earl, "If you brought him a board marked with a line to cut he would ask, 'Which side of the line do you want cut?'!"

The family relocated to Victorville, Calif., where Earl and Joan built and managed an apartment complex. In his spare time, Earl indulged his love of aviation by building a gyrocopter. He worked many years on a helicopter of his own design.

Earl left the high desert of California in 1974, moving to several locations before settling in Kingman, where he resided for 18 years.

In 2009, Earl relocated to the Southern California area to be near family.

Memorial services will be held at 9 a.m. Thursday, Aug. 8, at the Montecito Memorial Park and Mortuary in Colton, Calif., with full military burial services at 11:30 at the Riverside National Cemetery. Following the services, a luncheon and celebration of Earl's life will be held in Riverside.