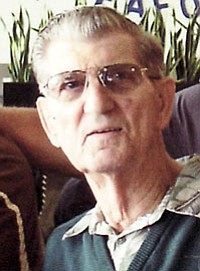 Kenneth E. "Ken" Adams, 84, of Kingman was called home to be with the Lord in the early morning hours of Thursday, Aug. 8, after a prolonged fight with pneumonia. Born Kenneth Ezell Adams on April 6, 1929, in Altus, Ark., Ken was the eldest of five children born to Julia Mayes Adams and Edward Adams.

As a youngster Ken enjoyed sports, especially baseball, and loved working on cars and motorcycles. In 1948 Ken enlisted in the Navy, and after his time there came home to help support his family. Work started at an early age for Ken, helping to support the family at the end of the Great Depression. Early jobs included working in the coal mines of Arkansas and Wyoming, where he eventually settled. Ken enjoyed dancing and riding his motorcycle when not in the mine.

After moving to Superior, Wyo., to find work in the mines, Ken met the love of his life and later married Kathryn (Tomich) Adams in Rock Springs on Aug. 12, 1950. The couple remained in Wyoming after Ken's family moved back to Arkansas.

The couple was married 61 years before Kathryn's passing in December 2011. Ken and Katie had two sons, Kenneth Jr. and later Keith after they moved to Cheyenne, Wyo., where they resided for 50 years before relocating to Kingman in 2002. Ken spent most of his life as a professional driver working for Trailways Bus Line and later Tri-State Steel, driving commercial over-the-road semis. Ken and Katie loved to dance and were regulars on Friday and Saturday night dances at the Eagles and Elks in Cheyenne. Other favorite pastimes for Ken included pheasant hunting, fishing, rebuilding cars and taking trips in their truck and trailer. The slots in Vegas, Laughlin and the Black Hills also played a key role in Ken and Katie's recreation time.

Ken was a gentle and devoted man to his family and never turned away when one of his sons or relatives needed a helping hand. Later in life Ken earned his GED, of which he was so proud. Ken was also proficient at many tasks, such as carpentry, tile work and automotive repair, and he never found a tool or piece of equipment that he could not fix.

In his last years in Kingman, Ken became a full-time caregiver for his wife after cancer, Alzheimer's and later a stroke. After his wife's passing in 2011, Ken became even closer with his son and family, making several trips to Wyoming and Tulsa to spend time with his friends and sister and her family. Kenneth loved to travel, and relished the family's trip to Hawaii on the couple's 50th Anniversary, and last December on their week cruise to Mexico with Keith and Marty, and his granddaughter Lindsey and boyfriend Ryan. He looked forward to going to Alaska in 2014, a journey he would never make.

Kenneth Adams spent his last hours at the KRMC Joan and Diana Hospice Home in Kingman with his son and family at his side. The compassion and caring displayed by the Hospice staff can never be appreciated enough by the family.

At his request formal services will not be held, rather a celebration of life will be hosted from 1 to 3 p.m. Saturday, Aug. 17, at Ken's home in Kingman. Refreshments will be served. The family invites all who knew Ken and his family to stop by and share a story and take part in fellowship remembering and celebrating his life. Ken's final journey home will be Oct. 5 to Cheyenne, where he will be laid to rest with his wife and son.