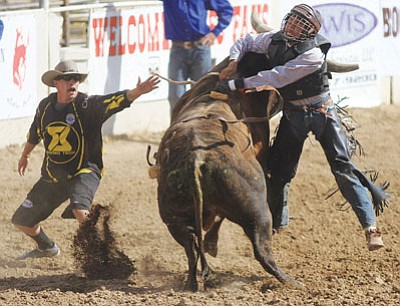 KINGMAN - Imagine spending a summer evening in the middle of Kingman with your sweetie at a drive-in movie and stopping for a twirl around the dance floor and an ice cream sundae at a sock hop.

Perhaps you would prefer the roar of scramble car engines or whine of radio control cars. Maybe prancing ponies or knights jousting for a lady's hand are more your style.

The meeting was designed to get ideas that the Fair Association Board could work toward while creating its short- and long-range plans for the grounds, said Bruce Bollinger, an association board member. Residents who attended were split into four groups to brainstorm ideas.

"Our motto is 'Yes we can.' Tonight we find out how we can do it," Bollinger told the group. "The Fair Association is a business. It's not really a government entity and businesses need goals to work toward."

Each suggestion brought a flurry of new ideas from surrounding tables.

Residents who attended also wanted to see more trees planted around the grounds, berms to deflect sound away from neighbors, a new office, a convention center, more bathrooms and upgrades to the kitchen areas.

Residents also got to design their own fairgrounds by arranging cutouts of the horse stables, arenas and buildings and marking out new areas for new buildings or arenas on a map of the 67-acre plot of land.

Mohave County Board of Supervisors Chair Gary Watson said he was pleased with the turnout at the meeting. He was especially pleased that at least two of the groups wanted to leave the rodeo arena in front of the grandstands and included a second arena for motorized sports, such as monster trucks and scramble car racing.

The location of the rodeo arena has been an issue in the past. The Kingsmen, who put on the annual Andy Devine Days Rodeo, would like to upgrade the current arena and move it closer to the grandstands, but motor sports groups want to use the same area.

The problem is that it takes a great deal of effort and money to groom the soil and get the arena set up to Professional Rodeo Cowboy Association standards before each rodeo.

"I was really encouraged by (the meeting), but I'm still wondering why they don't have a business plan," Watson said.

Bollinger explained at the beginning of the meeting that the ideas generated would give the board a better idea of what the community wants when it creates its business plan.