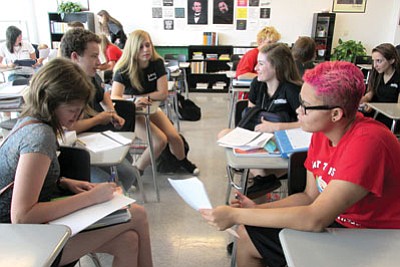 KINGMAN - When Tyson Spencer graduated from eighth grade at Kingman Academy of Learning Middle School in 2012, he wanted to find a local high school that would challenge him.

Spencer, now a sophomore, chose Lee Williams High School because of its new accelerated Cambridge program, which was instituted at the start of the 2012-2013 school year. Spencer, who wants to be a doctor or an engineer, has spent the past school year digging deeper than many of his classmates, analyzing information and interpreting data in history, biology and English.

"I want to be able to see things how they really are, and these courses will give me a better shot at that," said Spencer. "At Cambridge, you have to take the information they give you, apply your past knowledge to it and link them together to show how they relate to life now. It's all very analytical and requires you to think."

Cory Williams, Cambridge coordinator for the high school, said test results in history, biology and English showed that six of the participating freshmen were college-ready in all three subjects, eight were prepared for college in two of the three subjects and 20 had reached the college level in one subject.

Williams said that compared to U.S. students who took the tests, Lee Williams was above the national average across the board.

"We were expecting single digits because it was our first year and the curriculum was very rigorous," said Roger Jacks, superintendent of the Kingman Unified School District. "We're all very proud of the Cambridge students at Lee Williams and what they've accomplished."

The Cambridge program is Kingman's implementation of state Sen. Rich Crandall's 2011 "Move on When Ready" legislation. It is designed to offer students a rigorous and relevant curriculum that earns a Grand Canyon Diploma and opens academic pathways preparing them for careers and college.

Within Move on When Ready, emphasis is placed on allowing students to progress at their own pace rather than calculated seat time.

KUSD began discussing the Cambridge preparatory program in January 2012 for students at the district's two middle schools, said Jacks. He noted most students in Kingman, as well as across the state and nation, do well in school until they reach middle school, when their scores begin to decline for a variety of reasons. Jacks said the district was looking for an academic intervention program for them.

But because Lee Williams was opening that year, Crandall suggested implementing the high-school level Cambridge program for the incoming freshman there. Jacks said the school board "took a leap then," deciding in February to start it at the three schools and sponsoring a meeting in April that brought out 300 parents in support of the move.

Students throughout the district can apply for the program at Lee Williams and are accepted based on a point system that includes their grade point averages, standardized testing results, behavior, attendance and an essay. This year, 60 freshmen and 75 sophomores are participating in the program at the high school.

"I've seen the Cambridge curriculum stretch our high school kids to places they've never been asked to go educationally," said Williams. "For years, school has been about teachers giving out information and students taking tests. But is real learning taking place? The Cambridge program is an analytical and collaborative experience that asks students how a subject relates to a current event or life situation. It's pretty deep to ask a 15-year-old to do something like that."

Principal Gretchen Dorner said statistics show that 50 percent of graduating high school seniors arrive at college requiring remedial assistance. Dorner said the school's Cambridge program will enable her students to be prepared for the rigorous curriculum they will encounter wherever they enroll.

KUSD Curriculum Director Jeri Wolsey agreed, adding, "I couldn't be happier with the test results. It says we are going in the right direction and have possibly found the missing piece of the puzzle."

Lee Williams sophomore Correa, who scored in the top two in the nation on the history test, also chose the school as an eighth-grader at Kingman Academy of Learning Middle School. Correa said the curriculum is challenging and requires him to study and analyze more. Correa said he is glad KUSD offers the program, especially since Kingman is a small city and doesn't have as many educational options as big cities.

"Cambridge makes you think," said Correa. "You have to give interpretations in class. One of our topics was the Cold War, and we were asked whether we thought the U.S. was right or wrong in the role it played and why the other countries acted as they did. I worked hard to answer them. That's why they say that if you get a good score on your tests, you're college ready. You have to be able to think there, too."