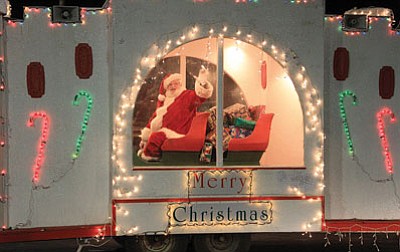 KINGMAN - The Christmas season kicks off in downtown Kingman in a brilliant way this weekend with a lighted parade and Christmas tree.

The Very Merry Parade of Lights, an annual tradition along Beale Street, will take place from 7-9 p.m. Saturday from First through Sixth streets, beginning at Locomotive Park. It will feature about 40 lighted floats, candy distributed by walkers along the parade route and a downtown tree-lighting ceremony.

"This is a big deal and we're really excited this year about it," said Carmella Hynes, owner of Sirens' Café and one of the event's organizers. "What makes it cool is that a lot of businesses have put time and effort into their floats. It's a fun event to kick off the Christmas season."

The event, sponsored by the Kingman Downtown Merchant's Association, will feature Santa Claus, who will ride in the parade with his house before being parked near the Christmas tree. Children are invited to have their photos taken with Santa and tell him their wishes for toys and other presents.

The tree-lighting ceremony, now in its sixth year, will take place at 8:30 p.m. at the city complex, located at the corner of Spring and Fourth streets. The tree-lighting ceremony was started by the Kingman Police Department as a fundraiser for the nonprofit organizations it supported. This year, the ceremony is organized by the Kingman Youth Advisory Commission, made up of local youth.

To help brighten the event, UniSource Energy Services purchased new LED lights for the tree, which will be decorated with ornaments created by local elementary school classes. Also, the event will feature hot cocoa and treats, sold as a fundraiser for the Salvation Army, as well as Christmas Cards for Soldiers and a Toys for Tots drop-off center.

"This event is always very well-attended," said Scott Rhoades, owner of Cellar Door Wine Bar and another organizer of the event. "I think it's because it's that time of the year and everyone is in the spirit of Christmas. It's a great family event and a lot of fun."