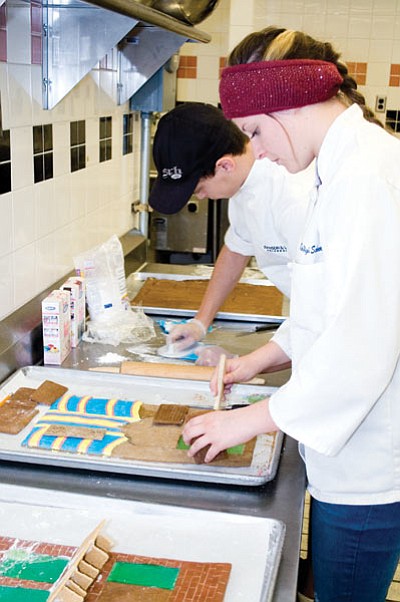 Kingman High School Culinary Arts students Emily Pelham and Aidan Curwick work on candy windows of their gingerbread movie theater. The theater will be part of a larger New York City scene the students are putting together for the annual Gingerbread Mania contest. (SUZANNE ADAMS-OCKRASSA/Miner)

KINGMAN - Students in Chef Alexander Mayo's Culinary Arts program at Kingman High School have had visions of gingerbread dancing in their heads for the last month as they sketched their designs for the annual Gingerbread Mania contest.

The contest is open to the public. It starts at 5 p.m. Dec. 11 in the Kingman High School cafeteria. The cost is $10 for the public and free for all Kingman Unified School District students to enter a gingerbread creation in the contest. Visitors who just want to come and ogle the sweet confections can do so for free. All ages are welcome and the top three winners will have their confections auctioned off to help raise money for the club.

The students will also be offering a pasta bar for visitors who may be tempted to swipe a little frosting or nibble off a corner.

The pasta bar is $7 for adults or students without an ID and $5 for students with an ID. Children age 5 and under eat free. The school choir will also be performing its winter concert in the auditorium that evening.

The students have been piecing together their sweet creations since the beginning of last month. The project is the largest culinary creation students are required to make in the first semester of the school year, Mayo said.

The students have to come up with their own designs, map out their design, determine what materials they'll use to build their creation, bake their gingerbread and start icing.

The trickiest part of the project is the gingerbread itself, said student Tyryn Pettway as he tried to glue two pieces of graham cracker for the deck of his team's Golden Gate gingerbread bridge back together with icing.

"It keeps breaking," he said. "Everything has to be edible, except the base."

Mayo, who is a graduate from the program himself and has a culinary degree from Mohave Community College, agreed.

Students are also forbidden to use any commercial boxed cake or frosting mixes for their projects, Mayo said.

"Nearly everything we make is from scratch," he said as he watched another student check the temperature of a pot of hard candy mix using a candy thermometer.

He does allow some leeway. For example, Pettway's group was using store-bought graham crackers for their bridge deck.

Students in the Culinary Arts program also learn meal planning, food and kitchen safety and industry terms, Mayo said. Students practice their skills by cooking lunch for the school's teachers and students at least once a week. They also cook food for tailgate parties at each of the school's home athletic games. Local organizations also keep the students busy with requests for fundraiser banquets.

All of the cooking, baking and mixing takes place in KHS' kitchen, where students often bump elbows with the school's cafeteria cooks.

In the second semester of the school year, Mayo really puts the students' skills to the test when he requires them to build a restaurant kitchen from the ground up. The students have three months to determine how many kitchen staff and servers they will need to hire, design uniforms for their staff, create a layout of their kitchen, plan a menu, and cook, serve and present a full meal to Mayo and one other judge.

"We run this place like a real restaurant kitchen. I want it to be as realistic as possible for the students," Mayo said. "I want them to be able to get hired in the finest restaurants."

Mayo's classes also count toward a degree at MCC, if students decide to continue to study the culinary arts.

Mayo has also made connections with the Cracker Barrel Old Country Store and Restaurant on Stockton Hill Road and some other local restaurants in an effort to help his students find jobs.

For more information on the Culinary Arts program at KHS or the Gingerbread Mania contest, call Mayo at (928) 715-0533.

Some Kingman Unified students find their niche in the kitchen that's a classroom
Kingman Photos: Candyland Houses
No contest, no problem:
Run, run as fast as you can to 'Gingerbread Mania'
Chef challenges community with gingerbread competition