Next phase of javelina season opens on Friday 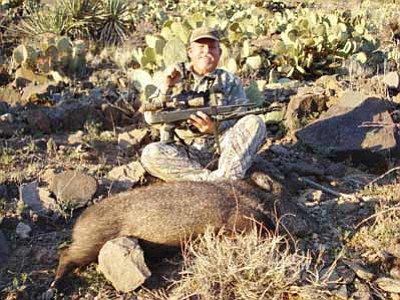 DON MARTIN/Special to the Miner<br> Don Martin took this 44-pound javelina last year in Unit 18 B.

In Arizona, javelinas are the second most hunted big game animal in the state. Only deer have more permits issued statewide.

Javelinas were designated as a big game animal in Arizona in 1929.

In 1974, HAM (Handgun-Archery-Muzzleloader) hunts were started in Arizona ostensibly to take the pressure off of the javelina herds.

Archery-only hunts for javelina were started in 1959 as an over-the-counter tag, but since 1992 archery tags have been issued only through a draw.

The archery-only and juniors-only javelina seasons have ended in Mohave County and Friday marks the opening of the annual HAM javelina hunts.

The Arizona Game and Fish Department has issued 450 javelina tags for units that are favored by many Mohave County residents.

In Unit 18B, which is located east of Wikieup, there are 250 permits.

The one-week hunt will take place Feb. 22-28 in units within Mohave and Yavapai County.

Unit 18B has largest amount of general tags available, with 450 pig tags issued.

The hunt success for these units in Mohave County is very much weather-controlled.

In past years, when a storm arrives in the units during the hunts, then success has traditionally been low.

If the weather is sunny and warm during the hunts, then the pigs will tend to be out and more visible to hunters and hunt success goes up.

HAM hunters in Unit 18B had the highest hunt success in the county in 2011, with 33 percent of the hunters filling their tags.

General rifle hunters in Unit 18B had just 22 percent success.

Those who are successful when hunting the little gray ghosts of the desert usually find them through the use of binoculars and/or spotting scopes.

The home range of javelina is between one and 1.5 miles, so hunters who have been able to determine where the herd boundaries are generally are the most successful.