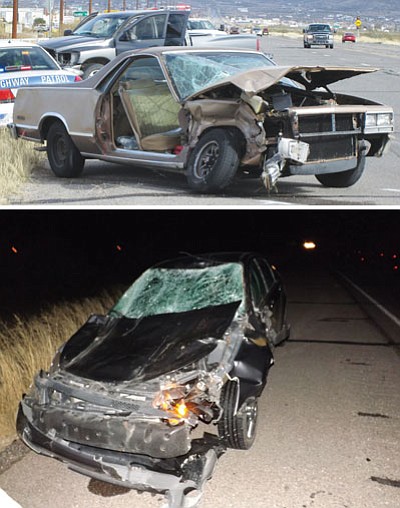 TOP: Two people were taken to the hospital following a crash Sunday on Highway 68 in front of the Texaco station. BOTTOM: On Saturday night, a man struck two cows with his car, which was totaled.

The cows were part of a herd of about 10 on the highway, according to a witness.

According to the Golden Valley Fire Department, the man was driving west in the right-hand lane when he struck the cows. At least one of them struck the windshield and rolled over the top of the car, partially crushing the roof.

In another Highway 68 incident, two vehicles collided at about 2:30 p.m. Sunday. The impact was serious enough to require firefighters to use the Jaws of Life to free a woman.

According to the Golden Valley Fire Department, the driver of a westbound Dodge pickup truck crashed into the side of a 1985 Chevrolet El Camino. Firefighters used the Jaws of Life to free a 53-year-old woman trapped inside the El Camino.

She and the 83-year-old driver were transported to the hospital with non life-threatening injuries.

The three occupants of the pickup, a 36-year-old female driver and her 35-year-old and 2-year-old passengers, were unharmed. According to the Golden Valley Fire Department, they were buckled in.