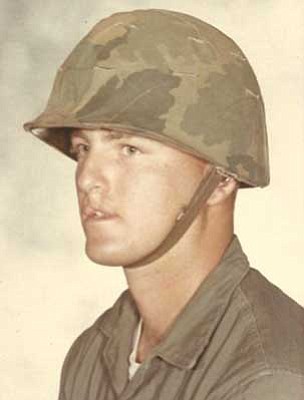 Upon graduation from Page, Ariz., high school, Bob enlisted in the U.S. Marine Corps as a combat infantryman with the Marine Force Reconnaissance companies, obtaining the rank of staff sergeant. He served two tours in Vietnam, and eventually Agent Orange brought many health challenges later in his life. Bob was a chef for many years at the Gardens of Kingman Assisted Living Center. He enjoyed being an active member of the Arizona American Legion Post No. 14, the Royal Order of Moose Lodge 1704, a life member of the Marine Corps League, and a member of the Veterans of Foreign Wars Post No. 3516.

Bob was preceded in death by his parents, Ulese and Genelle Dollarhide of Kingman. He is survived by three brothers, Bill, Ron and Jim; a brother-in-law, Mike Gagnon; sisters, Carol Gagnon and Kim Sutton; a sister-in-law, Alice Stipsky Dollarhide; and many aunts, cousins, nieces and nephews, and many dear friends. Bob never met a stranger, as all became friends. Bob will be remembered for his love of family, country and friendships full of enough love to last a lifetime.

Bob was laid to rest in a private veteran's memorial at the Mountain View Cemetery in Kingman on Saturday, Feb. 16. The family would like to thank Kingman Regional Medical Center, Drs. Al-Khatib and Hassan Hachem, chaplain Paul Pitts of the Mohave County Veterans Council, VFW Post 3516, the Patriot Guard Riders and the Marine Corps League for their outstanding support and dedication to our veterans and our family. We also thank Bob's dear friends at the Kingman Sportsman's Club for their celebration of his life.