Editorial: Armed, but not necessarily polite 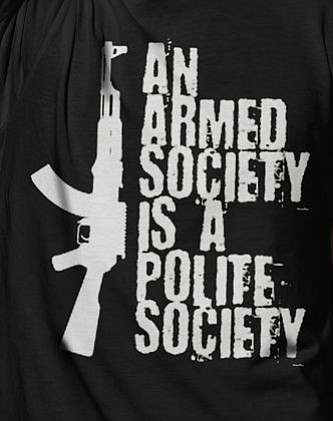 The most popular answer to our recent online poll about maintaining a ban on firearms at the Mohave County Administration Building was this: "An armed society is a polite society."

That's the idealist's view from some sectors of the gun rights community. Supposedly, an armed populace will be nice all the time because lethal force is just a quick-draw away.

Like most idealistic views, though, it crashes on the rocky shores of reality. Face it - we already are an armed society. But instead of being polite, it appears that the more armed we are, the more likely we are to shoot each other.

Now, before the online comment trolls form a virtual firing squad, here's some context. I am a gun owner. I like to shoot. (How well I shoot is another matter entirely.) While I think that we can do a much better job of backgrounding those who want to own firearms, I also hold that other so-called "gun control" measures - bans on military-style weapons and high-capacity magazines, for example - would be empty steps unless coupled with outright, enforced confiscation. And that would backfire on so many levels it's not worth going down that road.

That said, however, the evidence suggests we need a time out from our shiny, deadly toys. For example:

• Las Vegas, Thursday morning. A bunch of men get into an argument outside of a Strip resort. One group follows the other, guns down a man in his car and causes a wreck in which a taxi explodes, killing two more people.

• Delaware, this month. A former police officer shoots and kills his son's ex-wife and her friend outside of a courthouse where they had gone for a custody hearing involving the shooter's son. He exchanges gunfire with police and then kills himself.

• Phoenix, last month. A guy participating in mediation, which is supposed to avoid the adversarial nature of a court hearing, actually prepares in advance of the meeting with two guns, ammunition and a getaway car. When the meeting doesn't go well, he shoots the other parties and, eventually, himself.

• November, Jacksonville, Fla. A man pulls into a gas station next to a car full of teenagers playing loud music. He and one of the teens get into an argument. The man pulls out a handgun and pumps eight or nine rounds into the car, striking the teen with two, killing him. The shooter later says he felt threatened.

• And - what the heck? - an international one. South African "Blade Runner" Oscar Pistorious fires four shots through a locked bathroom door, killing his girlfriend. Even taking his story of a suspected intruder at face value, he still fired blindly through a door, which no responsible gun owner would ever do. Oh, and the original detective investigating his case had to be replaced because he's facing seven attempted murder charges for shooting at a minibus.

That's just a smattering of examples. Any week's worth of news would produce equally viable cases.

People with guns kill people. You take the gun out of any of the situations listed above, and you've got a screaming match, a fistfight or a tense wait for the police.

People, of course, will continue to own firearms in this country, and that is fine. Target shooting, skeet, hunting - all great pursuits.

Self-defense? I've never needed a weapon for that purpose, but others have, and both the law and history are on the side of responsibly owning a firearm for protection. No problems there.

Where we've gone wrong, though, is focusing too much on "shall not be infringed" and not enough on the Second Amendment's "well-regulated" wording. Gun ownership is a serious responsibility, just like driving, serving food and practicing medicine. But it's reached a point where guns are treated like accessories and playthings - not by all, or even by most, but by enough bad apples that those of us who have some idea what we're doing have to support reining in the idiots, even if we have to accept some new rules to do so.

But I'm open to ideas - as long as you're polite.