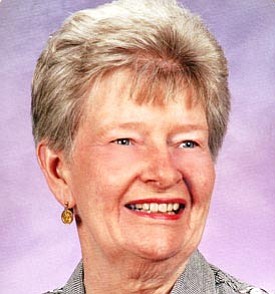 Lila was valedictorian in 1948 at Clayton High School, where she was awarded a four-year college scholarship.

She received a bachelor's degree in business education from Western Illinois State College in Macomb, Ill., in 1952. She started her teaching career in Neponset High School (Illinois).

She also taught at Mohave Union High School from 1967 to 1969. She retired from the Bureau of Land Management after 23 years.

Lila was a member of Pi Omega Pi and Business Education Club and was chosen for Who's Who Among Students in Universities and Colleges. She was also a member of St. John's United Methodist Church and National Association of Retired Federal Employees, an officer for Kingman Cancer Care, a former member of the hospital auxiliary "Pink Lady" at KRMC, and was in Kingman Republican Women.

It was our mother's philosophy to enjoy life, you must stay active and have a reason to get up in the morning. She stayed active in retirement and loved to travel. She was grateful for all the wonderful friends, acquaintances and family who enriched her life. She was deeply grateful for the blessings God bestowed on her and her greatest blessing was her four children, their spouses, nine grandchildren and their spouses, and nine great-grandchildren (with two more great-grandchildren arriving in 2013).

The service will be at 10 a.m. Wednesday, Jan. 9, also at Sutton's. Burial will be at Snareville Cemetery, Stark County, Ill.

In lieu of flowers, donations can be made to Kingman Cancer Care or KRMC Hospice.