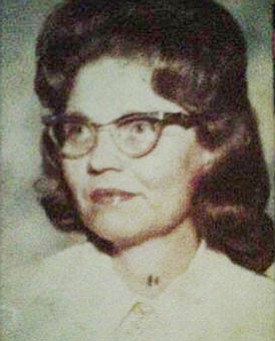 Our Heavenly Father came on Christmas morning to make Velma Louise Cain Osterhout new and whole again to walk with him on streets of gold. There were family and loved ones at her side in her home when this glorious event took place.

Velma live in Paramount, Calif., most of her life. She worked in aerospace production for 25 years. After losing her brother, Earl W. Cain Jr., she moved to Kingman and made this her home for the past two and a half years to be closer to her only living sister, who followed her to our Father's Kingdom on New Year's Day 2013.

Velma's survivors include her only son, Paul Lee Osterhout Jr. (Cindy); her grandchildren, Brian James Osterhout and Carey Osterhout; and her great-grandson, Mason.

We want to thank The Neptune Society for prearrangements of her cremation through Diamond and Sons of Bullhead City.