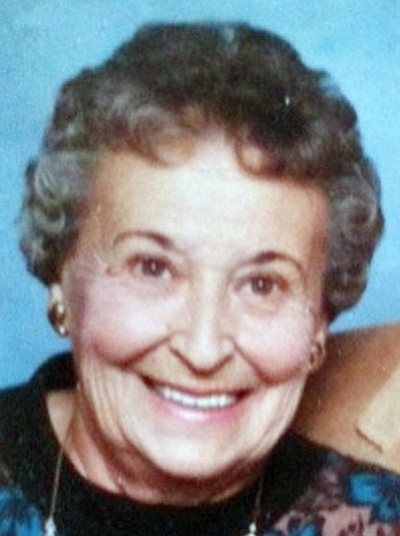 Virginia Mae "Ginny" Sinclair died Tuesday, Jan. 1, 2013, at the age of 90 while staying at The Gardens Nursing Facility in Kingman. She was born Nov. 10, 1922, in Hepburn, Iowa, to Tackla A. and James E. Shepherd. She had been married to Lloyd Sinclair for 41 years until he died in 1997. During her lifetime she lived in Iowa, Colorado, Utah, Kansas and Arizona.

She was a longtime member of the Red Hat Society, a family-known great cook, Best Pie Maker (the "Pie Lady") and fantastic storyteller. Ginny loved cats, enjoyed playing games, crocheted many items, collected new recipes and never turned down a chance for some teasing and fun. She also liked spending time with family and friends "scrounging" for treasures in her Chloride stomping grounds. During the last years of her life she was a daily patron of Yesterday's Café in Chloride where karaoke music, lively conversation and laughter were her favorites. Not many knew that she gave a lot of life's credit to her Grandma Dollie, who raised her after both her parents died of tuberculosis when she was a young child. She is remembered for being kind-hearted, trusting, loving and could mold a smile on anybody's face.

She was predeceased by her husband, Lloyd (Fuzzy) Sinclair; her only son, James E. Smaller Sr.; her stepdaughter, Ronnie Rae Gappa; her brother, Wesley Shepherd; her grandson, Shayne Siren; and numerous other loved family members and friends.

A memorial service will be arranged at a later date.

As she would often say to others, but is especially appropriate for her now ... "Bless your heart."