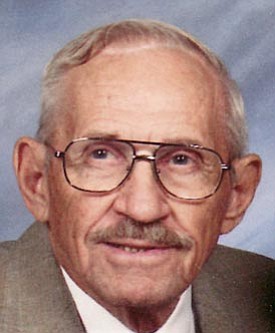 Carl August Harnisch passed away peacefully on Thursday, Jan. 17, 2013, surrounded by family. Carl was born May 14, 1927, on a farm near Milltown, S.D., to Anton and Lydia Harnisch. He married Audrey Jean Pederson in 1951 with whom he had four sons.

In 1966, the family moved to Kingman. He worked as a telephone engineer with Citizens Utilities Telephone Company in Kingman, where he worked until his retirement.

He was very active in the community and church. He served on the City Planning and Zoning Commission, and was lieutenant governor of the Kiwanis Club. He and wife Audrey were active members of Grace Lutheran Church.

He is survived by his four sons and their wives, Carl (Diane), Marc (Barbara), Paul (Teri) and Marty (DeAnna); six grandchildren, Andy and Mallory (to Marc and Barb); Kara, Jenna and Joel (to Marty and DeAnna); and Bennett (to Paul and Teri); and two great-grandchildren, Dahlia and Finley (to Andy and Jessica).