Kingman Photo: Ride in the Rain 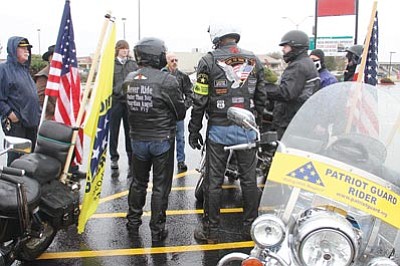 The Patriot Guard Riders in Kingman rode in the rain to Bullhead City Saturday morning to escort the family of Robert Earl Miller to his funeral service. Miller, who was 82, was a veteran of Korea and Vietnam and served 21 years in the Army. He retired as a Sergeant First Class in 1968 and was very proud of his service. Scott Henry was Saturday's Ride Captain. Pictured in front, with their backs to the camera, are Ride Captain Scott Henry (third from right) and his wife (right), new Kingman Ride Captain Dan Slama (left of Henry) and his wife Alice (to Dan's left).