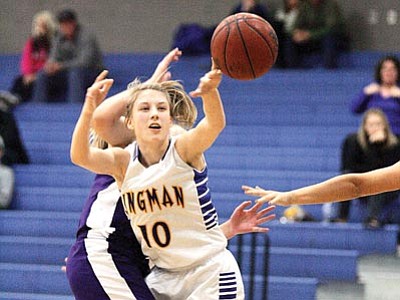 RODNEY HAAS/Miner<br> Kingman High’s Alison Owen is fouled while driving to the hoop in the fourth quarter of the Lady Bulldogs’ 45-31 win over Lake Havasu Tuesday night.

With playoffs seemingly out of the question, the plan for the final three games of the season is simple - finish strong and build for next year.

Kingman High did just that Tuesday night, coming out against Lake Havasu to take an 18-4 lead after the first quarter and never looking back in a 45-31 win.

"I talked to our girls about ... what I feel like we have more than most teams, and that's heart," said KHS coach Danny Gonzalez.

KHS was sitting at 9-3 coming off of the Christmas break and staring at a potential playoff spot.

But season-ending injuries to Desirae Gonzalez and Rachel Arave left big holes to fill for the Lady Bulldogs, and KHS struggled while watching their spot in the power rankings fall to No. 31, seven spots shy of making the playoffs.

"It's unfortunate, because I believe had the injuries not occurred, we would be in that area that we could push for a spot at state," Gonzalez said. "It would've been great for them to get that experience so next year, if it does happen, we won't be totally shocked."

While missing the playoffs is disappointing for a team that showed so much promise at the beginning of the year, 12-9 is a seven-game improvement from last year's 5-22 team.

With no seniors leaving the roster, next year should prove very promising for the Lady Bulldogs.

"We are leaps and bounds better then what we were last year," Gonzalez said.

"I thought it was a big outcome," Goulart said. "We stayed strong. Even though two of our starters are out, we are still trying hard."

The Lady Bulldogs traveled to Bullhead City Mohave on Wednesday and will close out the season Friday in Prescott.