With historical re-creation, Kingman man hopes for a religious revival 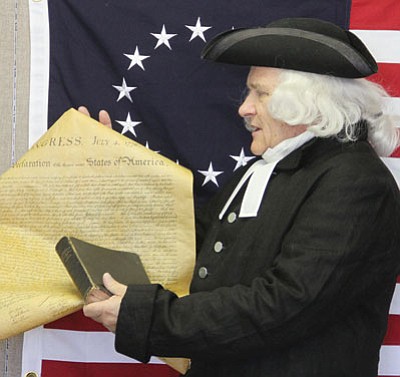 Grif Vautier, dressed as historical figure Jonathan Witherspoon, displays the Declaration of Indpendence at Kingman Presbyterian Church. Witherspoon was the only clergyman who signed the document in 1776. Vautier will give two presentations in Kingman during July.<BR>JC AMBERLYN/Miner

KINGMAN - The Rev. John Knox Witherspoon, portrayed in costume by retired Kingman Presbyterian Church pastor Grif Vautier, proudly holds up a copy of the Declaration of Independence and his well-worn Bible as he stands between two flags in the church's fellowship hall.

One is a copy of the red, white and blue "Betsy Ross" flag designed during the American Revolution, with 13 white stars depicting the 13 original colonies occupying the new country. The other features a pine tree and the statement "An Appeal to Heaven." It is a copy of the flag originally flown in 1775 by George Washington's Navy.

Witherspoon, the only clergyman who was a signer of the Declaration of Independence in 1776, is not afraid to make the connection between God and the new nation that broke away through force from Great Britain.

In fact, the sixth president of Princeton University, who came to America from Scotland in 1768, is both eager and proud to set the record straight about the beliefs of the nation's forefathers.

"God is mentioned four times in the Declaration of Independence," bellows Witherspoon in a thick Scottish accent. "This shows how much men and women of faith were involved in the founding of the country. And after the declaration was signed, the congress said it was to be announced first from the pulpits that gave us spiritual freedom. The true story of our spiritual heritage has never been told to our children."

Vautier sits back in a chair and pulls a hat off his white-wigged head. Several reference books - "God of Liberty" by Thomas S. Kidd, "John Witherspoon and the Founding of the American Republic" by Jeffry H. Morrison, and "Samuel Adams, A Life" by Ira Stoll - rest on a nearby table as he begins to discuss his long-time portrayal of several prominent historical figures.

They include Witherspoon; John Calvin, a French theologian and pastor; John Knox, a Scottish clergyman and a leader of the Scottish Protestant Reformation; and George Whitefield, an Anglican priest and powerful speaker who ignited the Great Awakening, a major religious revival in America.

Always a student of history, Vautier said he was looking for a way to make Reformation Sunday meaningful to his congregation after he moved to Kingman in 2000 from Clinton, Mass.

His first performance was as a news reporter interviewing Martin Luther, who sparked the Protestant Reformation in Germany. From there, Vautier moved on to other historical figures, writing scripts and performing at churches and schools.

"The whole purpose is for people to realize their spiritual roots," says Vautier. "We are totally oblivious about them. My hope is that by doing this, I can encourage Christians to be proud of their history and stand up for their faith. I see this as one small candle lit to illuminate the darkness surrounding our spiritual heritage.

"Revival has come in this country six times, and if the truth gets out, perhaps we can become a Christian nation again."

Witherspoon, a man described in history books as of medium height, somewhat stout, with bushy eyebrows, a prominent nose and large ears, was president of what was then called the Log College of New Jersey (now Princeton) from 1768 to 1792. He was a delegate to the Continental Congress from 1776 to 1782 and was twice elected to the New Jersey Legislature, serving on more than 100 committees.

At first, Witherspoon abstained from political concerns, but quickly came to support the revolutionary cause. He was elected to the Continental Congress in time to vote in favor of Richard Lee Henry's Resolution for Independence, declaring the united colonies to be free of the British Empire.

Shortly after, he voted for the Declaration of Independence, declaring to an opposing member that in his opinion, the country "was not only ripe for the measure, but in danger of rotting for the want of it."

"By 1776, I was fully involved," says Witherspoon, noting 27 of the 56 delegates who signed the Declaration were his students. "The British parliament was trying to pay bills from another war, and they came up with the Sugar Act, the Stamp Act and all these other acts. They were all acts of foolishness. Then they instituted the tea tax, which was a steep tax, and we steeped that in Boston Harbor. The British accused the college of being a seminary of sedition, and King George the III called what was going on in America the Presbyterian Rebellion because the majority of officers were clergy."

Witherspoon says members of the Continental Congress began debating in May 1776 about whether the new country should go to war against Great Britain, although blood already had been shed. When a decision was reached, Thomas Jefferson was asked to write the Declaration of Independence and the document was signed by the congress.

Witherspoon says it was quickly printed and distributed throughout the colonies on horseback and by foot.

"What makes a man give up land, riches and his life for what seems like a hopeless situation?" asks Witherspoon. "Many of these men were godly men. They had times of trial in their faith, as do we all, but in their writings they explained their beliefs.

"I signed the Declaration because I believe God meant for all men to be free. When a government becomes tyrannical, it is no longer ruled by God. Great Britain wanted to create a bishop of America from the Church of England, which would have squelched all voices of religious dissension here.

"We were meant to be free to worship."