'I was a rebel at heart' - a WWII story of courage and love
When the French Underground came calling in WWII, she stepped up - at risk to herself and her family 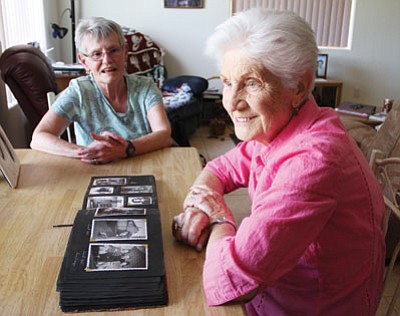 Genny Lucas, left, listens as her friend and co-worker Ginette Walker talks about her dangerous life in France during World War II and shows photographs from that time.<BR>JC AMBERLYN/ Miner

KINGMAN - When Ginette Walker, 86, joined the French Underground at 16 years old during World War II, she was only following in the footsteps of a man she loved and worshipped.

"My father, Louis Pemeant, was a postman in France, and he was involved in the war in a roundabout way," said Walker. "He knew many Jewish people on his route, and he also knew the Germans were going after them. He recognized the form letters that were coming for the Jews, and he would tell them before they got the letters so they could go into hiding or leave if they were able. I thought my father was a hero."

For Walker, who accompanied her father to help people after her hometown of Valence occasionally was bombed in southern France, the example was clear. And her duty to help others became even more pressing as she watched and heard cattle cars packed full of crying, screaming Jewish residents leave the city's train station on the slow trek to their deadly destinations.

So when a friend in her gymnastics class asked her to join the French Forces of the Interior (FFI), she didn't hesitate to participate.

"I wanted to be part of the FFI," said Walker. "I was a rebel at heart and I couldn't stand our enemies. I delivered messages for them, such as where enemy troops would be at certain days and times. It could have been very dangerous for me, but I didn't care. It was just something I had to do. I never really thought of being afraid."

Walker said she would sneak out on the balcony of her family's second-floor apartment at least several nights a week to take unread messages passed to her by teenaged friends to unknown people. She also helped steal pipeline gasoline for members of the FFI so they could continue their activities.

In fact, that's how she met her future husband, a U.S. Army military policeman who caught her group siphoning gasoline from a pipeline.

Because he took a liking to Walker, he overlooked their infraction.

The mission wasn't easy, said Walker, whose apartment was located between two hotel restaurants, one taken over as headquarters for the Germans and the other used as the Italian headquarters.

Walker said she had to sneak out of the house during the curfew hours of 9 p.m. to 6 a.m. without being caught by her family, the Germans or the Italians. Each time, she succeeded and passed on her information.

"During the war, so many crazy things were happening and many people were involved in the underground," said Walker. "I was taking messages warning members not to be at certain places or they could be killed. I probably saved lives. I feel now that I could have done more. I wanted to help and I was doing my part to fight the Germans and Italians."

She also warned a member of her extended family - her sister's father-in-law - to leave town.

Walker said the man owned the area newspaper and because of the information being printed, members of the underground decided to kill him. Walker said another FFI member warned her about the hit, and she passed it on so he could escape.

She said the man fled, but his wife was at the newspaper when the underground attacked and she was killed.

Walker said delivering messages was exciting and made her feel as if she was involved in saving France, but she later realized that if she had been caught, her family would have suffered for her actions.

Walker said she thought her father knew of her involvement at the time, although they never talked about it, because he often told her to be careful. When she discussed it with him as an adult, she said he understood why she participated.

With the war winding down in 1944, said Walker, her involvement ended and the defeated German and Italian troops retreated. Walker said she dated Jack Walker, the U.S. Army military policeman she met at the gasoline pipeline, for about six months when she was 18 until he asked her to marry him in France in September 1945.

At 19 years old, she left her family and country to move to Kingman to join her husband, who had been sent home five months earlier. Walker said if she hadn't gotten married, she would have become a missionary in Africa.

Kingman was like another world to Walker, who left a city of about 40,000 people in France for what was then a one-horse town. Snow was on the ground at home when she arrived to 100-degree weather in Kingman, and her green landscape in Valence was replaced with desert scenery.

Walker said she made up her mind to make the best of it and learn to work on her husband's family's cattle ranch, Mullen Ranch, located north of town.

"I'm glad I came here," said Walker. "I like adventure, and I was married and this is where Jack was. When I got here, I smiled a lot. I could speak English, but smiling was easier than trying to talk. On the ranch, everyone had a job, and the family taught me how to wash dishes. That was a big job because it was a working cattle ranch."

Walker said she spent her adult life raising two sons and a daughter, and now has grandchildren and great-grandchildren who visit her often. She and her husband moved off the ranch and into Kingman in 1946, and Jack died in 2004.

Walker volunteered at a local senior center for six years and now has volunteered for about a year at Kingman Regional Medical Center, where she works at the information desk and, fittingly, delivers messages one day a week.

Genny Lucas, a 10-year volunteer for KRMC who works with Walker, encouraged her friend to tell her story after hearing snippets as they spent time together. Lucas said Walker seldom talks about her wartime experiences because they still cause her pain, but Lucas said she believes the stories need to be told for the benefit of others and for Walker, too.

"She's been through so much and seen so much," said Lucas, who sat with Walker as she talked. "She just has to tell her story. I was born in the middle of World War II, in 1942, and it's always been fascinating to me. I thought I would learn a lot more about Ginette if she opened up, and I have. Now I'm trying to get her to write a book."