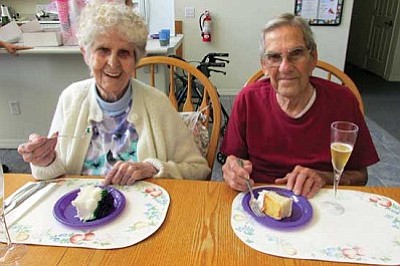 KIM STEELE/Miner<br /><br /><!-- 1upcrlf2 -->Frances and J.W. Stone enjoy pieces of cake during their 70th anniversary celebration at Helen’s Place Assisted Living in Kingman. The couple was joined by friends and family as they reminisced about their life together.

KINGMAN - When it comes to their recipe for staying married for 70 years, J.W. and Frances Stone easily agree on the main ingredient.

"You give and take," said Frances as J.W. looked at her and shook his head. "When he wanted to do something, I usually went along with it. But if I said no, he'd consider it. We had some good hunting and fishing trips over the years. It was quite a life."

J.W., 92, and Frances, 91, celebrated their 70th anniversary Thursday with family and friends at Helen's Place Assisted Living in Kingman. After being toasted with sparkling white grape juice and sharing a cake decorated with purple flowers - Frances' favorite color - they opened a gift bag filled with Moon Pies and Snickers, their favorite snacks.

Frances said she had never been on a hunting or fishing trip until she met J.W. in Phoenix, where he was stationed at Luke Air Force Base as an aircraft mechanic. They met at the Riverside Ballroom, where they liked to dance together, and married in 1943, before J.W. was shipped off to Iwo Jima during World War II. During that time, Frances worked as a riveter at Goodyear Aircraft in Phoenix.

When J.W. returned, they set up house together and in 1946 a son, Gary Lynn Stone, was born. He later moved to Kingman and was killed in an automobile accident in 2001 on his way to help his son, who was injured by a horse. Gary's daughter, Kayla Martin of Kingman, arranged for her grandparents' anniversary celebration Thursday, bringing along the cake, juice and presents.

"A 70th anniversary is unique, and not many couples make it that long," said Martin. "I think they have because of the values that were instilled in them. They care about and help each other out, and they don't give up. I see them as great role models."

The Stones moved to Kingman in 2000 to be near their son and have been residents at Helen's Place Assisted Living since January 2012. J.W. said he is glad Frances chose him as her husband over other military men in Phoenix, because he didn't want anyone else after he met her.

"I love her personality," said J.W. "It's hard to describe what has made our marriage work for so long. I think it's togetherness, outdoor activity and her cooperation with those trips. It's been a long but good road, and everything has been great. She went along with everything I wanted to do."

Frances said she has always been attracted to J.W.'s personality, too. Frances said J.W. loves to laugh, joke around and play the clown. In fact, he played a Shriner clown named Taco, complete with a clown outfit and big, red nose, for about 12 years in Phoenix to bring a smile to sick kids during hospitalizations.

"He still is a clown," quipped Frances about J.W. as he chuckled. "He just doesn't dress up anymore."

Chris Callaway, manager of Helen's Place Assisted Living, said the long-married couple has been an inspiration to her and other staff and residents at the facility. As she watched, J.W. entered the dining room behind Frances, parked his walker and pulled the chair out for his wife.

"He's very protective of Frances and won't let anyone else do what he can for her," said Callaway. "They're a great couple and are very positive about each other and life. I think a 70th anniversary like this is a record for the assisted living facilities around the country. I know it is for us."