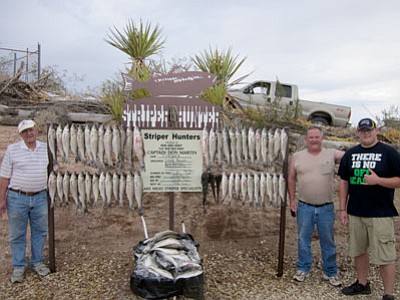 DON MARTIN/Special to the Miner<BR> Paul Collette, left, Kevin Nowicki and Rich Nowicki show off the 111 fish that were caught on a trip out of South Cove on Lake Mead Saturday night.

It is usually said that the third time is the charm, but this trio of anglers found their charm the second time around.

It all started June 1 when I slated a striper fishing trip with Mohave County residents Kevin Nowicki and Paul Collette, who live north and east of Kingman near Valle Vista, and Rich Nowicki, a former Kingman High School graduate who played football here from 2005-2009. Rich now lives in Flagstaff.

The weather was all messed up on that trip and we were besieged by high winds for many days immediately beforehand. The water temperature was in the mid 70s and, as we would find out, the fishing was poor, by my standards.

We caught just 28 fish that night - 27 stripers and a lone channel cat.

I have a policy that states if we don't get 30 fish in the boat on any trip, for any reason, you get to come again at no charge.

And so a future trip would be planned for the Nowickis and their 85-year-old friend Paul.

The fishing has really started to pick up this month, so we started planning and settled on last Saturday.

We arrived at my "Honey Hole" about 9:30 p.m. and I put out the Hydro Glow fishing lights. In place was the usual wager on the boat: The last angler to bring in a fish would be on for breakfast at Nancy Lou's in the morning.

It didn't take Kevin long to get "off the hook" when he brought in a feisty striper. Then Paul brought in a lunker, a fat striper that weighed more than 2 pounds, which for our area on Lake Mead is a better fish.

I had a chance to put the onus on Rich, but I missed a strike. A minute later, Rich had his first fish of the night in the boat and I was on for breakfast.

What happened next can only be described as "the perfect fishing storm."

I watched as a swarm of plankton appeared around the lights. Within seconds, a huge school of fingerling fish - probably threadfin shad - appeared and started feeding on the plankton.

Then we witnessed a phenomenon I usually see only once a summer on Lake Mead. A giant school of stripers, with some fish obviously in the 3-pound to 5-pound range, gathered around the boat in a feeding frenzy.

For the next five hours, the action was almost non-stop.

As soon as your bait was in the water, it seemed that you would get a bite. And most of the fish were well above the average 1¼-pound fish that are normally caught.

By 3 a.m., just five and half hours into the trip, every ice chest on board was full to the brim. All we could do was marvel at all of the fish that were still under the boat, gorging themselves on minnows that the lights were still attracting.

We were back at my home in Meadview before daylight and I just couldn't wait to count and put the fish on the scales.

We had 111 fish: 108 stripers and three channel cats. But one of the cats I had caught was a good one - it weighed 2 pounds, 8 ounces, which ties the leaderboard for the largest catfish of the summer tournament trail for Striper Hunters.

But the best was yet to come.

That 3-pound striper was caught by Jay Chan on an earlier trip.

We have a Big 10 jackpot in our tournament trail. Before this trip, the leader was the Tammy Faye Bollinger team, which had a 10-fish stringer that weighed 22 pounds, 12 ounces.

The best 10 fish from this trip tipped the scales at 26 pounds, 4 ounces - the all-time best 10 fish that have weighed since I started the Striper Hunters tournament trail almost five years ago.

Then it was time to weigh the top 40 fish that we had caught. I couldn't believe the weight: 71 pounds, 6 ounces, the second best all-time weight I have had.

To say this was a fishing trip of a lifetime is an understatement. Last summer, on a trip with the Kensen Lee family from Las Vegas and Chan, we caught 139 fish in just four hours and filled up the four fish ice chests - but there wasn't the size that we had on this trip.

Right now is a great time to go out at night and catch as many stripers as you want.

Here is what we used:

• One-inch pieces of anchovy with a small piece of squid in front of the anchovy on a Canyon Plastics ¼ oz. minnow or T series jig. Keep your bait under wrapped-up dry ice so it will stay frozen. If your bait thaws out, it's one bite and done!

• Hydro Glow submersible lights to bring in the plankton and minnows, and ice chests with lots of ice for your catch. Floating crappie lights work, but in my opinion not as well as the submersible ones.

We have been catching a lot of channel cats now that the surface temperature of the lake water has heated up to over 80 degrees.

On a trip last week, we actually caught 43 cats one night. Most are in the 1-pound range, but they are good eating too. We use the same bait to catch them.

As for line, I use 10-pound test McCoy Mean Green line that is manufactured in Lake Havasu and medium heavy open face spinning reels with 6- to 6½-foot rods.

Any premium line will work. Just make sure it is fresh.

And here is another little secret: spray paint the last 12 inches of your fishing rods with white paint.

When you fish at night and have lights on the edge of your boat, your rod tips will glow and strikes are much easier to see.