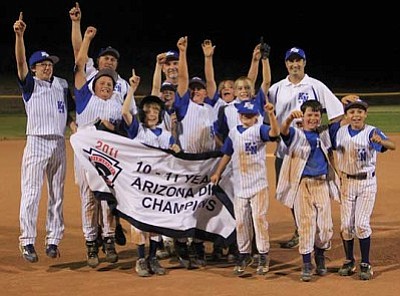 KINGMAN - Joey Meins got involved with softball at age 16 thanks to his uncle John Bathauer.

Meins recalled a tournament in Phoenix when his uncle arrived three hours early just to work on pitching.

"He led with emotion," Meins said. "He played with emotion. He was a spark plug and after the game was over, win or lose he would get over it either way."

Meins, along with more than 30 family members, will be participating in the Second Annual John Bathauer Memorial Softball tournament Saturday where, according to Meins, there will be plenty of Johnny stories to go around.

"There will be a lot of Johnny stories out there, the good, the bad and the ugly. They will be out there. But they will all be so good," Meins said.

Meins will be playing for the Ginger Bread House team. Last year his team won the tournament and it proved to be an extra special moment for him.

"It means a lot. Last year's tournament and winning it, that was probably one of the top softball experiences I've had," Meins said. "It was one of those things. I wanted it. I wanted that first one."

According to John's sister and Joey's mother, Fran Meins, 16 teams were confirmed with a possibility of two more. Teams are coming from Phoenix, Bullhead City and Lake Havasu.

"He was involved in the community so it seems important to carry on in his name," Fran said. "He always said, 'You get out of the community what you put into it.' This is a way we can keep giving back in the memory of him."

Last year the tournament attracted 18 teams and raised $5,000 that was used to erect benches at Centennial Park that will be dedicated in John Bathauer's memory.

Starting this year, proceeds from the tournament will go toward the John Bathauer Memorial Scholarship to be handed out to a graduating high school senior who plans on attending college and has faced some type of adversity.

In addition to his softball playing days, John was a member of the Kingman softball board and the Kingman North Little League board and later president.

He helped coach the softball team at Kingman High School and when his twin boys, Mike and Matt, were old enough to start playing Little League, John stopped playing softball so he could coach them.

"My husband was a jack of all trades, but softball he was very good at," Anne said.

Fran added: "He was quite the ballplayer. Our whole family is. We are just a huge softball family, all his kids play, all my sisters and my kids. There are quite a few of us."

Besides the games, there will be a home run derby, raffle, games for the kids and live music all day as the family gathers to celebrate the life of a beloved brother, husband, father and uncle who lost his battle with cancer in March 2012.

"We are a big family and we rally around each other in times of need and times of celebration," Meins said. "I think we had close to 30 for the cancer walk and half of them were from out of town. We definitely have support for each other and the memory of Uncle John."