Bill aims at Department of Education, targets money for states 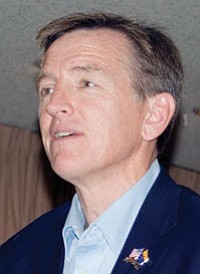 KINGMAN - A new education bill before the U.S. Senate would eliminate 70 programs from the U.S. Department of Education, gut some of the authority given to the department through the No Child Left Behind Act and push the responsibility for education down to the states.

In a news release, U.S. Rep. Paul Gosar, R- Prescott, said he voted in favor of the Student Success Act, H.R. 5, Friday. The bill passed the U.S. House of Representatives by a vote of 221 to 207 and moves on to the U.S. Senate.

"Caring about our students and their futures requires that we beat back the federal government's takeover of our education system. The boondoggle known as No Child Left Behind proved disastrous for parents, teachers, school administrators, and most importantly, students," Gosar said. "I have more confidence in parents, teachers and local school districts to make decisions than I do Washington bureaucrats."

Arizona Rep. Doris Goodale, R - Kingman, said she hasn't seen the bill, but was not surprised at the attempt to push control of education back to the states.

"Many Republicans in Congress want to do away with the federal Department of Education," she said. "I'm all for that, but is each state ready to take this on? Who's going to control the money - the governor? The Legislature? A separate department? How do we make sure that money is being spent properly? Who takes on that responsibility?"

The bill could actually create more bureaucracy at the state level than it might eliminate at the federal level, because states might have to create a new department or hire additional employees to handle the added responsibilities, Goodale said.

According to House Republican Conference's website, the bill would:

• Eliminate more than 70 programs and their employees from the Department of Education.

• Create a grant program with the money saved from the elimination of the federal programs. The grant money would be given to states and local school districts to spend as they please with the requirement that at least 10 percent of it be used to support private initiatives to improve student achievement.

• Allow school districts and states to set their own funding levels.

• Allow states to come up with their own ways to measure improvements in schools and teachers.

• Prohibits the U.S. Secretary of Education from imposing conditions on states including those involving the Common Core standards. Common Core is an educational program that was created by several states and business leaders. Proponents of the program say it will give students the skills to compete in today's work place. Opponents of Common Core say it is an attempt by the federal government to impose a national education standard.

• Prohibits the U.S. Secretary of Education from "creating additional burdens on states and school districts through the regulatory process."

• Prohibits the secretary from "demanding changes to state standards and coercing states to enter into partnerships with other states."

• Outlines a set of procedures the secretary must follow before issuing federal regulations.

According to the Congressional Budget Office, implementing the bill would cost the federal government $114.3 billion between 2014 and 2018.