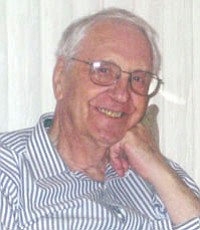 Tom, born June 7, 1929, was the third child of four born to Louie and Ada (Papworth) Gossi in Clayton, Idaho. In November 1941, his family moved to Honolulu, Hawaii. They lived about 10 miles from Pearl Harbor and experienced the history-making event. At the end of World War II, the family moved to Boise, Idaho, where he graduated from Boise High School in 1947.

In 1949, he started his career in the telecommunication industry. He married Shirley J. Gilster on April 29, 1950. Together they had five children. Tom's career took him to many places, such as Kennewick and Pullman, Wash.; St. Croix, Virgin Islands; Puerto Rico; Guam; Cape Coral, Fla.; and Show Low and Mesa, Ariz. In 1983, he married Donna M. Fisher and moved to Kingman. They spent years together traveling and enjoying family. He retired in Kingman in 1993. Tom was a wonderful husband, dad, granddad, great-granddad and uncle. He loved his family and extended family very much, and especially enjoyed family reunions.

Tom was always involved in the community where he lived. He joined the Masonic Fraternity in Pocatello, Idaho, and he was president of the Lion's Club in Moscow and Cascade, Idaho. He became active in the Lion's Club on St. Croix. After joining the Elks Lodge in Show Low, he became a life member.

While working in Kingman, he became a Certified Class I Engineer in the National Association of Radio and Telecommunications Engineers, Inc.; president of the board of directors of the Canyon State Credit Union; president of the Kingman Masonic Shrine Club; and he held several offices in the Kingman Elks Lodge No. 468.

After retirement, he served as secretary of the Kingman Masonic Lodge 22. He organized and became a Master Mason at the Rough Ashlar Masonic Daylight Lodge No. 79 and served for many years as secretary of the Kingman Community Foundation. Tom loved his church community at Trinity Episcopal. He served in many capacities. Many from the church have expressed how he made them feel so welcome.

Tom's loving, generous and accepting personality, along with his contagious smiles, wonderful "bear hugs," and love for his family will be long remembered and missed by many, especially his family who loved him so dearly.

Tom was preceded in death by his parents, son-in-law Gary Ferguson, and his son David.

Many thanks to the KRMC Radiology Department, hospice, Dr. Mohtaseb's office, Dr. Sahawneh, and his many friends who have helped us during this journey. In lieu of flowers, please contribute donations to Mohave County ARC.