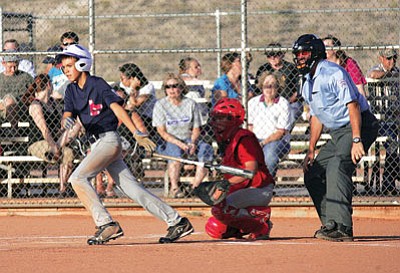 "The city of Kingman does a great job with our fields, and that's one of the things we always push," said Kingman North Little President Leigh Pitts. "We have great fields, the weather is good and I think that sort of draws it."

Also helpful: the reputation that both Kingman North and South have developed in hosting TOCs, All Star tournaments, and the success of last year's state Minor's tournament. According Kingman South President Oscar Lopez, that reputation was a major reason for awarding the tournaments to Kingman.

"I think it really did, especially in the eyes of the district administrator, Donna West," Lopez said. "I think that was the biggest part. We have never really had any major issues occur during a tournament that wasn't taken care of immediately."

According to Pitts, Lake Havasu City also bid for the tournaments. At the end of the day, the district decided on Kingman.

"Goodness, look at the weather," Pitts said. "Where are you going to find this kind of weather? It's a lot better then playing down in Havasu, where it's 110 degrees when the sun is going down."

Havasu will host the Minor TOC beginning Thursday and running through Saturday.

The single-elimination Major TOC will kick off at 5:30 p.m. on Monday when the Red Sox of Kingman South will face Laughlin. The Dodgers will represent Kingman North and will play Bullhead City at 7:45 p.m. The tournament will continue through Wednesday with the championship game.

"Our families don't have to spend hundreds of dollars to travel, getting hotel accommodations and eating out every night, and you never know when you are going home," Lopez said of the tournaments being in Kingman. "It's a night-to-night basis. At least with our teams here, if any of our teams end up going home early, then they just drive down the street and go home."

Lopez said the tournaments were moved up by two weeks after Little League decided to move the regional and sectional tournaments. He wasn't sure of the true reason, other then maybe giving players who do make the Little League World Series more time to practice.

However, during last year's state Minors tournament in Kingman, some of the players on the teams had already started school, or where going to be starting school within the next week.

"It could be," Lopez said of the possibility of earlier school starts. "We haven't heard why they did it."

Kingman South will also host the 13-14 All Star tournament, July 8-12. This year, South combined with North to field a senior league team for ages 13-16 and will form two separate All Star teams for the 13-14 and 15-16 age groups.