Raise in store for Mohave County workers despite drop in revenue 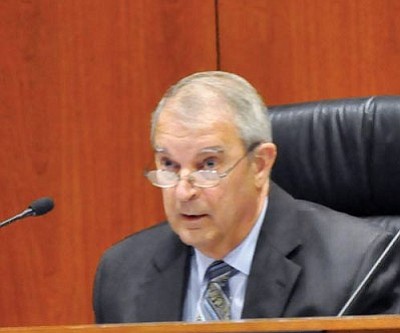 KINGMAN - County employees could see a 2.5 percent cost-of-living adjustment in their paychecks next fiscal year even though the county's budget is expected to shrink.

During the Board of Supervisors budget workshop Monday afternoon, County Finance Director John Timko said that the county could afford a 2.5 percent COLA increase for employees without increasing property tax rates for residents.

The drop in property values from the housing market bust is just starting to hit the county's assessment books. The primary property assessments the county uses are calculated using the market values from nearly two years ago.

However, the county will still have the funds for an employee raise because of a nearly $700,000 expected increase in state shared sales tax revenue and because the county paid off the lease for the county administration building six years early.

The county took out $19.9 million in bonds to build the administration center in 2004 and was to make $1.8 million a year lease payments over the next 15 years to OPUS West of Phoenix, the firm hired to design and build the structure.

The county had to pay a 1 percent penalty for paying off the lease early, Timko said, but it beats the 4 percent interest the county was paying each year on top of the lease payment.

District 5 Supervisor Steven Moss asked if the county would have enough money to continue to support the employee pay increase in the future.

"What have we done make sure we stay in flux, that we can carry this forward?" he asked. "It's not that I don't want to give the employees a raise. I'm just very hesitant to vote for a recurring cost that we can't pay for."

The primary support for the employee raises will come from the money saved by paying off the county administration building's lease, Timko said. He also expects to see an increase in property tax revenues in 2015.

"I think Mr. Timko is being very conservative in his tax projections," said District 4 Supervisor Joy Brotherton. As a real estate agent, she has seen foreclosed properties in the last few months selling as soon as they come on the market and for more than they were previously selling for.

Ken Fielder, the chief appraiser for the Mohave County Assessor's Office, agreed with Brotherton and Timko.

While the county's 2014 budget is balanced, Timko said, the county is still waiting to see what the state will charge for the Arizona Health Care Cost Containment System, new initiatives passed by the Legislature and how much lottery money the county will get this year.

Mohave County is currently battling the state in the Legislature to secure its share of state lottery money that is doled out to counties each year. The County's share is usually around $500,000, but this year the Legislature has designated Mohave County as one of five "metropolitan" counties in the state that are not entitled to the funds because their population is more than 200,000. Mohave County has 200,186 people, according to the 2010 U.S. Census.

But even with those lose ends, the county should still have enough to fund some sort of a raise for employees, Timko said.

The Board will receive a tentative budget in July and has to approve a final budget before Aug. 1.