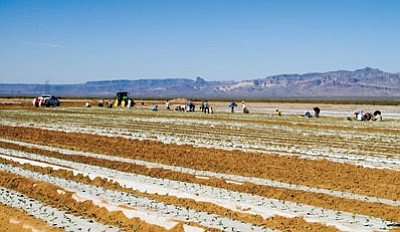 Workers plant pepper seedlings Friday morning at Kingman Farms. The farm is located on land owned by Jim Rhodes. Rhodes bought nearly 80,000 acres of property during the housing boom and planned to develop several large master planned communities in Mohave County, such as the 33,000-home Golden Valley community Pravada. He now plans to use around 1,000 to 1,500 acres to grow vegetables.<BR>SUZANNE ADAMS-OCKRASSA/Miner

KINGMAN - Las Vegas developer Jim Rhodes has returned to Mohave County, but instead of planting houses in the Golden Valley and Red Lake areas, he's planting peppers, tomatoes and cucumbers headed for pickling.

Rhodes' newest company, Kingman Farms, has started breaking ground on a 200-acre commercial vegetable farm off of Aztec Road behind the three model homes he built for his former master planned community Pravada.

"It's his dream to turn the valley green and provide jobs for the area," said Dick Mills, general manger of farm operations.

Despite being in the middle of a desert, the Kingman and Golden Valley areas are ideal spots to farm because of how close they are to major highways and major markets, Mills said. The grand plan is to farm about 40,000 to 50,000 acres in Mohave County using a sophisticated underground, GPS drip irrigation system and sell the produce to national and local stores, restaurants and food services. There are also plans for a vegetable stand for the general public on Aztec Road near the entrance to the farm.

Mills said he is well aware of Rhodes controversial history with Mohave County.

"I've worked in this industry for 45 years. I did my research before signing on and he has stood behind his word," Mills said.

Rhodes bought nearly 80,000 acres of land in various parts of Mohave County during the housing boom in the early 2000s. He planned to use the land to build five different master planned communities in Mohave County near Temple Bar, White Hills, Golden Valley and two near the Kingman Airport. The developments would have added 119,300 new homes to the county.

Rhodes was sued by local businessman Scott Dunton over a land deal in 2007 and got wrapped up in a 2008 scandal involving the sale of six city of Kingman-owned well sites within Pravada's boundaries.

A year later, Rhodes filed for Chapter 11 bankruptcy in order to protect 32 of his companies, along with the Las Vegas master planned communities of Rhodes Ranch and Tuscany and parts of Pravada.

He was also sued in 2009 by the Nevada Cancer Institute for not making good on a $10 million pledge and again in 2010 by the Federal Deposit Insurance Corp. for defaulting on a $2.6 million loan for his Las Vegas Tropicana Durango project.

Rhodes battled for four years with the county, the Arizona Corporation Commission and local residents over groundwater use for his developments.

Most of Mohave County's communities, such as Golden Valley, depend on groundwater as their main source of drinking water. Golden Valley residents in particular were concerned that the more than 30,000 residential units planned for Pravada would drain the aquifer dry and leave them without water.

The ACC eventually granted Rhodes approval for wastewater and water treatment facilities for Pravada in 2008, but only after he sold his stock in the companies to Utilities, Inc.

Mills said he has assured several residents who have come to his office seeking information on the project that the company has a handle on the water issue.

"Mr. Rhodes spent millions of dollars on water studies for this area. There's more than enough water here for everyone. There's more water here than we could use in a generation," Mills said.

A 2007 U.S. Geological Survey study of the Sacramento Valley aquifer in Golden Valley showed water level declines of as much as 55 feet in some wells between 1943 and 2006.

Mills pointed to the underground drip irrigation system Kingman Farms has partnered with special white "mulching" plastic as proof of its pledge to conserve water.

Workers prepare the ground by removing all of the desert vegetation and spraying down the dirt with water. The dirt is then divided into rows using a GPS system on a tractor. The rows are lined with underground soaker hoses and covered with white plastic. Another machine comes along and punches holes in the plastic for workers to plant seedlings in. The water released by the soaker hoses is controlled by an automatic system that uses weather reports to determine how much water to give the plants.

You can actually smell the water when you stand in the fields and the dirt looks and feels more like a light, fluffy loam than coarse desert sand.

"You use a third less water with subterranean drip irrigation," Mills said. "Home owners use more water on their gardens by using a garden hose than we do on the same area of land. In fact, we use less water on an acre of land than an average household does."

According to the U.S. Environmental Protection Agency, the average U.S. household can use 400 gallons a day. Mills did not have an exact figure for how much water the system would use because the company hasn't finished installing the system and planting crops.

However, he said every drop would be counted, along with everything else the farm does to its produce, and will be reported to the U.S. Department of Agriculture as part of the department's food safety program.

Mills also said the company is working to reduce the dust some of its equipment kicks up. However, not all of that dust is coming from Kingman Farms, Mills said. Some of it is coming from a nearby rock quarry and from the Mineral Park Mine. Weather also is also a big factor in how much dust is kicked up, he said. Gusty winds in mid-May created a huge problem despite the fact that the farm was watering the dust the whole time.

"Some days you will have dust, no matter what you do," Mills said. "We are wetting the ground before we work with it and we are fully in compliance with the (Arizona Department of Environmental Quality) regulations. Actually, agricultural industries are exempt from most of those regulations."

Mills said he welcomes people who want to talk with him about the farm. His office is located in one of the model homes off of Aztec Road. He can be reached at dmills@kingmanfarms.com.