Hinckley finds his calling on Route 66 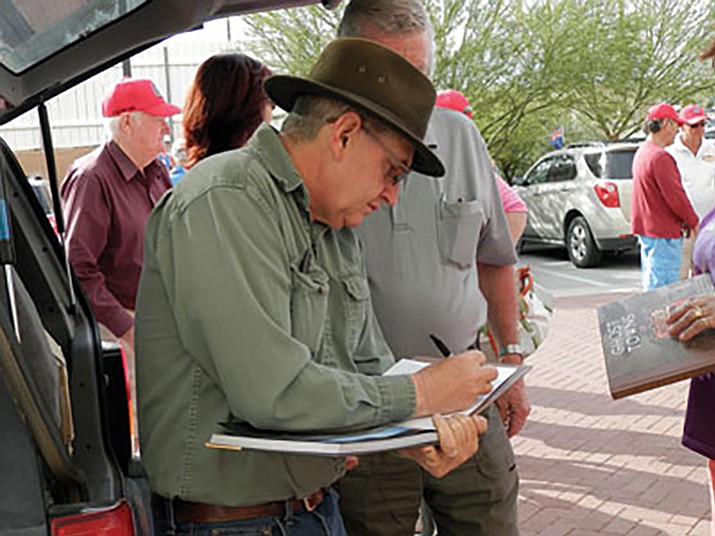 Author Jim Hinckley signs copies of “Ghost Towns of Route 66” after talking about the highway’s colorful history with a tour group from Australia. (JIM & JUDY HINKLEY/Courtesy)

KINGMAN - When Jim Hinckley moved here after graduating from high school in Jackson, Mich., he fell head over heels in love.

Not with a person. With a place.

Hinckley, originally from Morehead City, N.C., first moved to Kingman during the summer of 1966 when his father was discharged from the U.S. Navy and wanted to relocate as far from water as possible. After living here a few years and moving to New Mexico and Michigan, Hinckley returned to Kingman on his own to get to know the colorful history of the area and the people living here.

"I fell hopelessly in love with the romanticism of the Southwest and the landscape," said Hinckley, 55, manager of Penske Truck Rental in Kingman. "I've always been a bookish person and I grew up watching old Technicolor movies. In fact, one of my heroes was Andy Devine.

"I've always been into old things, and my mom said I was born 90 years old. This place just fit. Like an old pair of shoes, it just seemed right."

The shoes fit Hinckley and have carried him into a career as a chronicler of life past, present and future on Route 66. Hinckley said the 2,000-mile highway, which runs from Grant Park in Chicago to the Santa Monica Pier in California, has been a part of his life for years. His father bought property on old Route 66, or Oatman Road, in Golden Valley, and he learned to ride a bike and drive a car there.

After he got married, Hinckley obeyed his wife Judy's nudging and began writing about cars.

In 1990, his first article was published by Hemmings "Special Interest Autos" magazine about a junkyard along the border of Arizona and Mexico that seemed locked in time with a variety of vehicles from the early 1900s, including a 1917 Oldsmobile Express truck and a 1936 Hudson Terraplane truck.

"I wrote a lot of automotive history for magazines, then decided to take the second part of who I am with what my mother called 'the gift of telling people where to go' and merge history and travel," said Hinckley. "I found the time period of 1885 to 1940 absolutely fascinating.

"During that period, the transitions were so dramatic and rapid. Automobiles were a vehicle for change, no pun intended, and brought about hotels, gas stations and highways like Route 66."

Since 2006, Hinckley has written "Backroads of Arizona," "Route 66 Backroads," "Greetings from Route 66," "Ghost Towns of the Southwest" and "The Route 66 Encyclopedia."

He and Judy also run "Jim Hinckley's America," which oversees a daily blog; lectures; tours; speaking engagements; a DVD series under development through Diamond Valley Productions in Prescott Valley, Ariz.; a weekly radio program for AM 1230 in Alamogordo, N.M; and a photo exhibition currently on display at Route 66 House in the Czech Republic.

Hinckley said "The Route 66 Encyclopedia" came out in October after 18 months of work and is a concise history of every community along Route 66.

It also includes a history of special places, such as the restored Wigwam Motel in Rialto, Calif., whose teepees have been welcoming guests since 1949.

There's also Enchanted Trails R.V. Park and Trading Post in Albuquerque, N.M., that features older, tiny travel trailers for guests to use. The book includes the stories of the people who were instrumental in the highway's evolution.

The author is currently working on a companion to the encyclopedia, called "Route 66 Historic Atlas," which is due out in 2014.

It will include a foldout map of every state along Route 66 as well as details on crime scenes and disasters along the highway, film locations and celebrity associations, pre-1926 historic sites and military bases and activity.

Hinckley also finished an unnamed book that will be published this year about the evolution of Route 66 as seen through its 1920s to 1970s promotional material.

And he has completed a Route 66 travel guide, titled "Travel Route 66," that features interesting sites a mile or two off Route 66, from The Cave Restaurant and Resort in Richland, Mo., which is located inside a cave, to Amboy Crater, an extinct volcano in California. The book will be released in early 2014.

All of Hinckley's travel books are published by Voyageur Press.

"What is happening on Route 66 is amazing," said Hinckley. "It has become so popular that it's now feasible for people to buy these old hotels along the highway and fix them up. I think people have found that our modern era is so sterile, while Route 66 is more personal. It transcends cultures and languages.

"The best way I can put it is that Route 66 is like Mayberry come to life. People talk to each other as they travel and help others plan trips on it. It's like a big family gathering."

Hinckley said his schedule consists of book signings, travel, interviews and writing. He spends a lot of time providing news, photographs and travel information for Route 66 sites around the world and meeting with visitors when they come to Kingman.

Hinckley said he enjoys passing along his knowledge about Route 66, even though many people know a lot more about the highway than him.

"I don't see myself as an expert on Route 66," said Hinckley. "I've just always leaned to the thought that if you have a gift or a talent, you have an obligation to bless others with it.

"I'm in the right place because I'm enamored with the Southwest. This has led to so many things and opened many doors for me. This is my opportunity to share with people, and that's why I do what I do.

"It's a grand adventure and I have no idea where it's going from here, but it's most enjoyable and a real blessing to me."

Visit www.route66chronicles.blogspot.com for more information on Hinckley and his work.