Moss lists plans for $500,000 windfall
$100,000 for Sarah's House will have plenty of strings attached, supervisor says 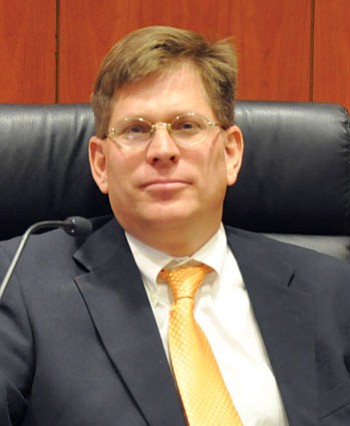 KINGMAN - Mohave County District 5 Supervisor Steven Moss plan for the $500,000 the county expects to get from the state lottery proceeds is raising some eyebrows.

Moss is asking the Board of Supervisors to consider using $200,000 of the money to fund two new deputy positions in the Colorado City area.

He wants to use the remaining $300,000 to support contracts with nonprofit organizations that help out law enforcement in each of the three major cities in Mohave County, such as Sarah's House in Kingman and the Interagency Council of Lake Havasu City.

Both Kingman Boys and Girls Club Chief Professional Officer Bill Ward and Boys and Girls Club Board President Monica Bush have raised questions about where the money is coming from, why other nonprofit agencies aren't being offered a chance at the funding and why Moss named Sarah's House and the Interagency Council specifically in his agenda item.

The county wasn't expecting to get the $500,000 from the lottery fund this year, Moss said.

Earlier this year, the Arizona Legislature had designated Mohave County a "metropolitan" county based on its population and decided that the county would not get its annual $500,000 share of the state lottery money. Reps. Doris Goodale, Sonny Borrelli and Sen. Kelli Ward fought the bill and were able to protect Mohave County's share of the proceeds.

"We weren't expecting to get it, so we didn't budget for it," Moss said. "I thought it would be a great idea to support law enforcement, so I suggested that we use part of the money to fund two new deputies for the Colorado City area and use the rest to support nonprofits that help law enforcement."

"I just think that nonprofits in the private sector can do a more cost-effective job than the local government can in these situations," he said. "This isn't a gift. The county can't give organizations money. There has to be a contract. The county has to get some service in return."

Moss said he suggested the Interagency Council of Lake Havasu City and Sarah's House in his request to the Board as examples of possible nonprofits to fund. He wasn't trying to direct the money to any one organization.

"I suggested them because I've had a lot of interaction with them. I know what they do," he said. "I didn't suggest one for the Bullhead City area because I don't personally know of any nonprofits that works with law enforcement in that area.Besides, it's not my district. That's something (District 2 Supervisor) Hildy (Angius) would have to decide."

"I'm just throwing the idea out there. If it passes, it passes. If it doesn't, it doesn't," he said. "If someone has a better suggestion, I'm more than willing to listen. I'm just trying to get the best bang for the taxpayer's buck."

The Board meets at 9:30 a.m. Monday at the County Administration Building, 700 W. Beale St.