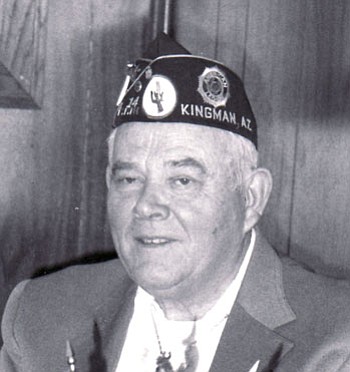 After high school graduation he enlisted in the U.S. Navy and proudly served his country during World War II aboard naval airships and was stationed at Lakehurst Naval Air Station, N.J. Following his honorable discharge from the Navy, he and his wife moved out west, working as machinist and owner/manager of several auto parts stores. He was a 43-year Kingman resident, th place where he raised his family and enjoyed the wonderful climate and gorgeous blue skies.

He generously gave unconditionally as a devoted family man and took great pride in his role of Grandpa to his three grandchildren, who admired the wisdom and values that he shared. Earl was quite handy and could fix or build anything. In his spare time he enjoyed gardening, woodworking, collecting everything from baseball cards to state quarters, and was a huge NASCAR race fan. He was a very active member of the American Legion, committing over 40 years in patriotic service to his fellow veterans, comrades and community, and had many friends at Swaskegame Post 14. He was a man of few words but never spoke badly about anything or anybody, and would always extend a kind and friendly word to everyone he met. He will be greatly missed by all who knew him.

He is survived by his beloved wife of 63 years, Florence; his loving daughter, Carolyn; and his three grandchildren, Crystal, Clayton and Cameron.

A memorial service and celebration of Earl joining with the Lord will be held at noon on Saturday, March 30, at the American Legion Post home located at 225 Oak St., Kingman.