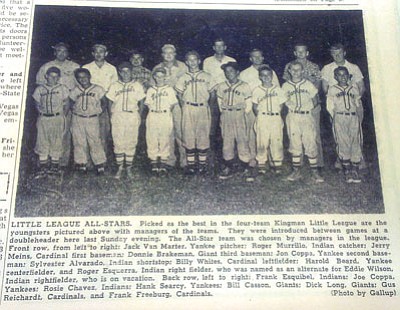 Members of the Kingman Little League All Star team in 1953, and their coaches, are shown in this photo taken from an edition of the Mohave Daily Miner in August of that year. Pictured, front row from left, are Jack Van Marter, Roger Murrillo, Jerry Meins, Donnie Brakeman, Jon Coppa, Sylvester Alvarado, Billy White, Harold Beard and Roger Esquerra. On the back row from left are Frank Esquibel, Joe Coppa, Rosie Chavez, Hank Searcy, Bill Casson, Dick Long, Gus Reichardt and Frank Freeburg. Eddie Wilson, who according to the caption was on vacation at the time, is not pictured.

KINGMAN - The story goes that in the summer of 1938, a Williamsport, Pa., resident named Carl Stotz began experimenting with different baseball field dimensions with his nephews and some of their neighborhood friends.

By 1939 Stotz had established a league with three teams, and from that modest beginning Little League Baseball was born.

"I think we are one of the oldest Little Leagues on the West Coast," South Little League President Oscar Lopez said.

The league will kick off its 60th anniversary celebration at 10 a.m. next Saturday, March 23, with its opening ceremonies at Southside Park. The league is still working out some of the details of the season-long celebration, but are planning to have some teams wear the Cooperstown Collection throwback jerseys.

"We are trying to make it something to remember, something for the kids." Lopez said. "That way, when they're 30 or 40 and Kingman South is getting ready to celebrate 100 years, they can maybe look back and reflect that this was our old jersey when we celebrated our 60th year."

According to newspaper accounts from the Mohave Daily Miner in 1953, teams played on Tuesday and Friday nights right after softball and on some occasions played doubleheaders. The season began on June 2 and ended Aug. 2 with the announcement of the All-Star team. It appears there were no District All Star tournaments like there are today.

According to Lopez, Kingman Little League branched off into two separate leagues about 28 years ago when there 10 major teams in the league. Because of this split, Kingman North Little League was formed.

"At that point there they made us split," Lopez said. "Of course our numbers have gone down since then, but it's easier for us to continue as two separate leagues."

In the meantime, Lopez is still searching for someone who has some type of connection to that first year, but admits it's been difficult to find.

"From my understanding, there wasn't a Major age program," Lopez said. "We are trying to make this a memorable year. One of the biggest things is trying to get people to come out and help us and have people give us ideas of things they would like to see happen this year."

Lopez would like find someone with ties to 1953 or within that time frame to throw out the first pitch for opening ceremonies. The Kingman Police Explorers are already lined up to present the colors, a step Lopez said was taken to mix a little bit of youth with age to celebrate the anniversary.

"We want to show that we've been here for 60 years and will hopefully be here for another 60 years," Lopez said.