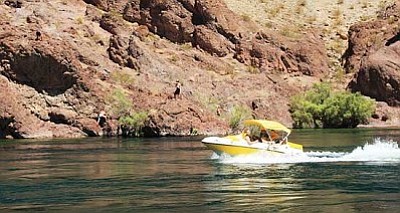 KINGMAN - Boaters who plan to be somewhere in the Colorado River system this weekend can expect to pass through law enforcement checkpoints manned by five separate agencies.

An arrest for operating under the influence, known as an OUI, carries the same penalties as a DUI.

All boaters passing through the checkpoints will be subject to a systematic safety inspection ensuring proper life jackets and working fire extinguishers are on board.

"The responsibility for boating safety among watercraft users is becoming increasingly important on our waterways," said Velma Holt-Buhr, the west sector supervisor for Game and Fish Region 3 in Kingman. "The area is growing quickly and we share these waterways with California and Nevada. It's becoming very congested, which lends itself to more potential hazards."

This weekend's enforcement is not the only one planned for the system.

An enforcement action last year resulted in nine boat operators who were arrested on OUI charges, including two who were reportedly under the influence of drugs, according to Zen Mocarski, a program manager with Game and Fish,

While the overall compliance percentage was about 79 percent at two checkpoints, several boat operators were cited for not having the proper number of life jackets, expired registration, underage consumption, and lack of a working fire extinguisher.

The most common infraction regarding equipment was lack of a Type 4 throwable device.

On average, said Mocarski, about 24 percent of boat operators who were contacted last year had consumed alcohol, but that doesn't mean they were over the legal limit of 0.08 percent.

However, he also pointed out there were several drownings at Lake Mead last year, some that were alcohol-related.