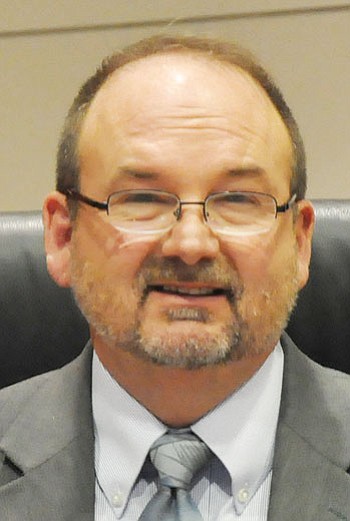 KINGMAN - New Mohave County Administrator Mike Hendrix's employment contract stands in stark contrast with that of former County Manager Ron Walker, who made more money and had a host of perks and benefits that Hendrix isn't getting.

"No one really deserves a contract like what Walker got. I think this contract with Mike is fair and I think he does too," said District 2 Supervisor Hildy Angius, who campaigned on the county never offering another contract like Walker's.

"We wanted it to be easier. We didn't want it to cost the taxpayers as much," said Brotherton. "Mike didn't write this contract. We wrote it together."

Walker resigned in December. The Board approved Hendrix as the new county administrator on May 13 and signed a 19-month contract with him.

Walker's contract had a number of perks, including a company car and a year's severance pay and benefits if he was fired.

"Comparing the two (contracts) is like comparing apples and oranges," Angius said.

Hendrix will be paid $147,500 a year and will be subject to an employee review by the full Board every six months.

Walker's salary was around $180,000. He received a review once a year in an executive session of the Board of Supervisors.

Both contracts designate them as at-will employees who can be fired at any time without cause.

If fired, Hendrix would get one month's salary and benefits, including paid time off, in a lump sum payment.

He will also have the option to step back into the role of county engineer if the Board ends the contract before Aug. 31.

Hendrix's contract is also missing several pages of perks that Walker was entitled to as county manager.

According to his contract, Walker was entitled to his own county vehicle insured by the county (he never took the county up on the offer).

The county also paid for Walker's health insurance; short and long-term disability insurance; life insurance; membership into professional groups, such as the International City/County Managers' Association; his travel to and from professional seminars; and subscriptions to professional magazines and newsletters.

The county was also required to provide Walker with an attorney if he was sued while working as the county manager.

Walker also had veto power over any agreement in a legal suit against the county if he was also personally named in the suit.

Walker was a controversial figure who angered many county residents, in part by instituting a dress code for the public at Board meetings, prohibiting guns in county buildings, setting up a security checkpoint at the entrance of the County Administration Building and dismissing comments made by members of the public during Board meetings.