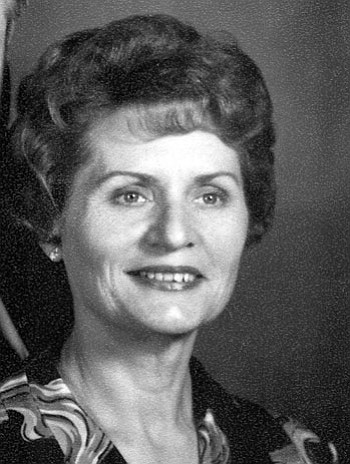 Norma Fay Gross, loving mother, grandmother and great-grandmother, passed away at the age of 80 on Tuesday, May 21, 2013, in Kingman. She was an only child born Nov. 29, 1932, in Bisbee to Benjamin and Pansy Jacoby.

Norma's father, Benjamin, was a hard rock miner and moved his family from Bisbee to Oatman and from there to Chloride. Norma met her husband to be, John F. Gross Jr., son of pioneer family John F. Sr. and Bertha L. (Bacon) Gross. John Sr. was a rancher and son of Charles and Concepcion (Ferra) Gross, who in about 1875 homesteaded the Old Gross Ranch, located in Bismark Canyon, Mineral Park, which is south of old Duvall mine.

John Sr. bought the old Curtain Ranch of Golden Valley and when John Jr. came home after World War II, he took over the ranching operations and moved the ranch headquarters to the present-day location of the Gross Ranch in Golden Valley.

Norma and John were blessed with a large family of five boys and one girl. Norma was a devoted wife, mother and homemaker her entire life. Her house was always spotless and she cooked three meals a day. Her day always started early, as she would be fixing breakfast for John and her children and packing lunches for everyone. After getting her family off to work and school, she would set to cleaning and doing laundry.

There was always plenty to do with five boys, one girl and a husband. At the end of the day when the kids and John came home, there was always dinner waiting, chores for the kids, homework and then bed.

Norma loved her family and the ranching way of life and she was active in all aspects of it. John and Norma were very active in the local ranching business. Norma and John were 4-H leaders for the Forceful Feeders club. She was involved for many years when her children were raising 4-H animals for the Mohave County Fair.

Norma also liked to travel. She went on several trips sponsored by the Mohave County Museum of History and Arts to Utah and Arizona, and one that included a trip to Australia. She enjoyed playing cards and reading the Mohave Miner newspaper. Norma was a fan of the Phoenix Suns and watched the Indianapolis 500.

She is loved and will be missed by her family and friends. She was preceded in death by her husband, John F. Gross Jr., son Darryl J. Gross, and grandson Kenneth Gross. She is survived by her children, Michael (Becky) Gross of Kingman, James (April) Gross of Kingman, Bertha (Marty) Katz of Las Vegas, Farrell (Cindy) Gross of Golden Valley and Benjamin (Kim) Gross of Kingman, and a sister-in-law, Mary Lou (Gross) Barnhart of Albuquerque, N.M. She has 14 grandchildren and 21 great-grandchildren.

Services will be at 10 a.m. Thursday, May 30, 2013 at Sutton Funeral Home, 1701 Sycamore Ave. in Kingman with a graveside service following at Mountain View Cemetery, 1301 Stockton Hill Road.

In lieu of flowers, a donation may be made to the Mohave County Museum of History and Arts or the charity of the donor's choice.