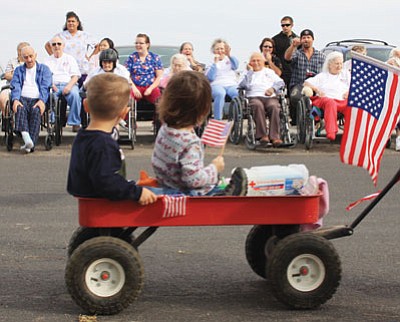 Parade participants from Lilly Pad Daycare wave to the crowd at the 2009 Veteran’s Day Parade held at the Lingenfelter Center and The Gardens at Kingman. (JC AMBERLYN/Miner)

KINGMAN - Larry Conner is looking forward to the annual neighborhood Veterans Day parade The Lingenfelter Center for Alzheimer's Care provides for its residents who served in the military.

Conner, 78, who has Alzheimer's and moved into the facility in July, served in the Marines before the Vietnam War. He first joined the Army when he was 15 years old, but was tossed out when his age was discovered. Instead, he became a Marine at 18, teaching the use of automatic rifles and taking them apart blindfolded at Camp Pendleton in California.

"I wanted to get away from home," said Conner. "My pappy used to tell me how much he hated Marines, so I decided to join to show him what they're really like. Marines are the first troops in when there's a war and most of them end up getting killed, but they're also the ones who do the most damage. I like the idea of having a parade here for veterans like me because we were willing to give our lives for everyone. I'm very proud of my military service."

The parade, which will take place in the streets around the facility at 1099 Sunrise Ave., is scheduled for 2:30 p.m. Nov. 11. Organizers at The Lingenfelter Center are looking for participants, from marching bands and floats to anyone who wants to carry flags and walk in the event, which will last about a half hour.

"This parade is a tribute to our residents who are veterans and can't go to the big parade," said Maria Sanchez, activities director at the facility. "At our past parades, I've seen some of our veterans light up when the parade goes by. They wake up and smile and even tap their feet to the music. It's pretty amazing and it melts your heart to see it."

The Lingenfelter Center houses veterans from all branches of the military, said Sanchez. Of its 79 residents, there are about 25 veterans at the facility. Last year's parade included the Kingman Fire Department, the Andy Devine Days Rodeo queen and princess, a local car club and children from the center's on-site daycare.

Shirley Foster, a nurse at The Lingenfelter Center for seven years, said she has seen the veterans enjoy the parade each year and believes it is a good idea. Foster said many of the older residents remember their military service, because Alzheimer's typically destroys short-term memory while leaving long-term memory intact. In fact, most can still recite the Pledge of Allegiance from their childhood days.

"We need to honor our veterans," said Foster. "They gave up part of their lives and served their countries. I think being remembered like this makes a difference to them."