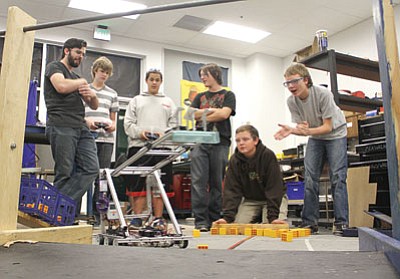 Team 60 Kingman Robotics members practice a “block party” game with a robot Tuesday night at Lee Williams High School. It is part of an upcoming FIRST Tech Challenge for grades 9-12.

KINGMAN - The Kingman FIRST Robotics Team 60 is paying their good fortune forward by mentoring a new robotics team in Tuba City as part of a $4,000 grant from AZ For Inspiration and Recognition of Science and Technology.

"We've been wanting to mentor another team for a while," said Celeste Lucier.

But there weren't any teams locally that needed help setting up, so when an email arrived in Lucier's inbox from AZFIRST offering a three-year grant and a chance to help out a new robotics team get off the ground, Team 60 jumped at the chance, she said.

"It's neat to know that we're not the only ones struggling," Lucier said, referring to the design and build process needed for each competition.

Starting a team from scratch can be pretty overwhelming, Lucier said, especially for those who are unfamiliar with robotics. If you're lucky, one of the students will have some experience playing with robotics or you can find a mentor from the community who is willing to volunteer, she said.

It can also be pretty expensive, Lucier said. Tuba City will also get a grant from AZFIRST to help with start-up costs, but a lot of the money the clubs bring in comes from fundraisers and sponsors.

Team 60 plans to set up a regular Internet video connection to mentor the new Tuba City team, she said. The money from the grant will be used to cover travel expenses to the regional competition.

Team 60 has been building robots and taking them to competitions since 1996 and is made up of 30 high school students from both Kingman Academy of Learning and the Kingman Unified School District. There is also a Lego League, which offers robotics competitions for middle school students.

Every January, the teams get a box of parts and a list of tasks that their robot must complete in the competition, Lucier said. The students have six weeks to brainstorm, design, build and program a robot from the parts kit that can complete all of the tasks.

Last year's robot had to throw Frisbees and hang from a scaffolding, she said. The teams also have to work with three other teams' robots in the competition. Last year, Team 60 took second place in Phoenix.

"It usually involves long, long hours of work after school, but the kids really enjoy it," Lucier said. "It's electrifying. There's typically 80 teams on the field at the same time at the Las Vegas regional event."

Four years ago, the team qualified for and went to the national competition.

The club has its long-term rewards, too, according to Lucier. The students learn teamwork and important skills in computer programming, construction, electronics and problem solving.

Mohave Community College is also offering scholarships in the school's science, technology, engineering and math departments for Team 60 students. Students who participate on a FIRST team at the 2014 regional competition in Chandler are also eligible to apply for more than $16 million in scholarship opportunities.

The students also learn to give back to the community, she said. Team 60 members are required to complete some sort of community service project, whether it's promoting the team at a booth at the county fair or helping paint a local veteran's house.

This year, the kids are working on a special project for a Kingman Academy teacher whose son has cystic fibrosis.

He has trouble maneuvering an electric wheelchair, so the team is trying to build a more car-like chair that will be easier to handle, Lucier said.

The club hopes to use the design to help others who have difficulty getting around.