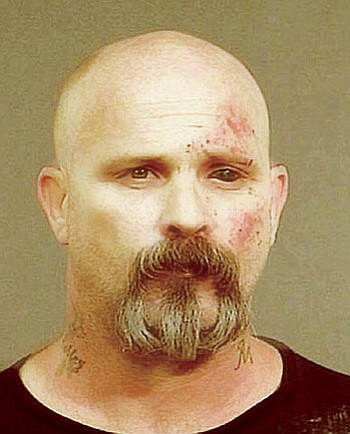 KINGMAN - A man jailed on a charge of first-degree murder allegedly assaulted a detention officer at the Mohave County jail.

Michael Anthony Rivera, 49, of Kingman, reportedly struck the officer in the face when the officer entered his cell at about 10:20 p.m. Monday. He was restrained and later charged with felony aggravated assault on a detention officer.

Rivera nearly two years ago was charged with using his car to kill Nickolaus A. Gerenscer Jr., 23, in front of the victim's home in the 2100 block of Valentine Avenue.

Gerenscer was the boyfriend of Rivera's stepdaughter. He was struck twice by Rivera. Rivera allegedly also tried to strike the victim's father and brother that day. The men witnessed Rivera hit Gerenscer at a high rate of speed and then circled back to strike the victim again as he lay on the ground.

Rivera told Kingman Police officers the Nov. 21, 2011 killing was an accident, but a number of witnesses disputed that contention.

He has fired at least two attorneys and his trial has been postponed a number of times. A new trial date has not been set and one won't be held until some time in 2014.