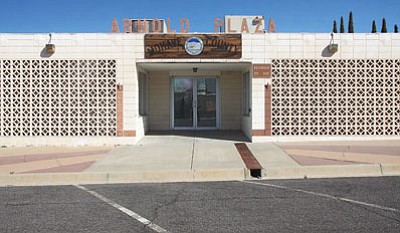 The Mohave County-owned Arnold Plaza building in downtown Kingman has so many issues, the county hasn’t been able to unload it. (JC AMBERLYN/Miner)

KINGMAN - Mohave County leaders might not know what to do with a dilapidated, abandoned building the county can't seem to get rid of, but at least there's some consensus on who's to blame.

"It's Mohave County's fault that nothing has been done to repair it," said District 3 Supervisor Buster Johnson of the Arnold Plaza building at 301 and 303 Oak Street.

"When I took office, there were buckets in there to stop the rainwater and plastic to cover the computers. Mohave County has done this and we need to clean up the mess."

So far, though, the Board of Supervisors hasn't figured out an affordable way to do so.

It was offered at public auction Oct. 21 but no bids were received.

According to staff reports, remodeling the building for general office use would cost the county almost $2 million. It would cost about $600,000 to demolish it. A "do nothing" approach of holding onto the building until conditions are more favorable for selling it would cost about $200,000 for a roof replacement and painting the outside to keep water from coming in.

"If we were to use it, we'd have to deal with asbestos issues and whatnot," said Supervisor Steven Moss. "So future use without major investment is not going to happen. Demolishing it costs too much money, and repairing the roof is a significant amount of money.

"So in my view, the option is that we either let it sit and rot until we have extra money and feel comfortable investing in tearing it down or we see if we can offload it to another governmental entity without bearing any expense ourselves. I don't want the county writing any checks regarding this building."

The Board also balked Monday at several suggestions offered to get rid of the building.

Board Chairman Gary Watson suggested selling the plaza for less than fair market value to a charity or government entity, or spending about $180,000 to remove the asbestos inside that keeps potential investors from buying it.

Several interested parties have viewed the plaza recently but passed after inspecting the building and reading reports about its condition.

Supervisor Hildy Angius, District 2, asked Johnson if he would prefer to spend money to tear down the building rather than sell it for less than market value. Johnson said he is concerned about the county's long-term responsibility with the asbestos, because according to reports, even if the building is sold, the county would have to pay for asbestos removal if the new owners fail to do it.

Johnson said he doesn't want to obligate a future Board to have to come up with money to fulfill that obligation.

"The line of thinking was that if it were given away to some benevolent organization they would be able to do it and it would make financial sense," said Angius. "Right now it has no value. But the city of Kingman is growing and the downtown area is thriving, and at some point that land might have bigger value.

"I just don't see how we can justify spending a half-million dollars to tear down a building that has a value of $20,000. I think we should still look at other options."

Angius asked how the county could remain liable for asbestos removal if the building was sold, and Mohave County Deputy Attorney Bill Eckstrom confirmed that to his understanding of federal law, the county would continue to be responsible.

Angius asked Eckstrom to research the law and return to a future Board meeting with a clarification.

Moss also requested information on whether requiring a performance bond of a buyer would relieve the county of liability.

The Board sent the matter back to staff to find answers to members' questions and concerns and report them at an upcoming meeting.

In other business, the Board:

• Approved a resolution joining hands with the County Supervisors Association of Arizona in requesting changes in how money from the 15 counties in Arizona is being spent by the state. The Board signed a resolution asking the Arizona legislature to restore local Highway User Revenue Funds to the county instead of using them to fund state agencies. Also, it signed letters to Gov. Jan Brewer and legislators requesting they eliminate county payments to the Sexually Violent Persons program at Arizona State Hospital, re-establish the county's share of lottery revenue and increase state investment in transportation infrastructure.

• Approved the closure of the Mohave County Department of Public Health, Nursing, Nutrition, Environmental Health and BT Division location on Nov. 22 so staff can attend a mandatory staff development day.

• Approved the purchase of 31 fleet vehicles to Jones Ford Mercury of Wickenburg, Ariz.; Bill Alexander Autormotive of Yuma; Chapman Ford of Scottsdale and PFVT Motors Inc. of Peoria, Ariz., for a total amount of $993,385.83 on behalf of the Public Works Department.

• Approved the lease of 75 computers for the Mohave County Library District through CSI Leasing of St. Louis, Mo., with an annual cost not to exceed $16,000.