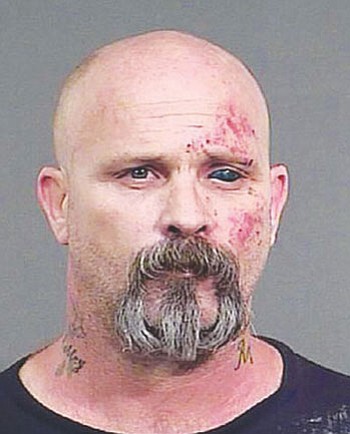 KINGMAN - Accused murderer Michael Anthony Rivera is scheduled to plead guilty early next year in front of Judge Steven Conn, but what crime he might admit to committing is unknown at this time.

Stephen Duncan, Rivera's Phoenix-based attorney, told Conn on Monday that a plea agreement had been reached, but no details were provided.

Conn set a Jan. 10 hearing date to possibly accept the change of plea.

According to Chief Deputy County Attorney Jace Zack, plea deals are not public record until entered in court.

Zack did say, however, that the deal does not involve a guilty plea to involuntary manslaughter, which was a concern that was raised by one of the victim's relatives.

Rivera, 49, allegedly used his Cadillac to run down Nickolaus A. Gerenscer, his stepdaughter's 21-year-old boyfriend, in front of Gerenscer's home in the 2100 block of Valentine Avenue on Nov. 21, 2011.

He is charged with first-degree murder and other crimes.

Witnesses told Kingman Police investigators they saw a car "screeching" down the street after it struck Gerenscer at a high rate of speed. Then it turned around and struck him again as he lay on the ground.

Deputy Police Chief Rusty Cooper confirmed the victim was hit twice, and that Rivera also attempted to run into a crowd of people, all acquaintances and relatives of Gerenscer.

Two of those people, Gerenscer's father and brother, were allegedly Rivera's intended targets.

An argument reportedly preceded the incident and there is evidence the feud had been going on for a while. What the dispute was about is not known.

While Rivera reportedly told police the killing was accidental, Gerenscer was hit hard enough to knock his shoes off. One of them was about 30 feet from his body, according to a neighbor who witnessed the killing.

Kingman Police officers followed the vehicle to a residence in the 3900 block of Suffock Avenue. Rivera ran into the home, but later exited and surrendered.

He has been in the custody of the Mohave County Jail since the day of the killing.

Duncan also advised Conn that a plea deal has been reached in an unrelated incident that occurred earlier this month at the Mohave County Jail.

Rivera allegedly punched a detention officer in the face after the officer entered his cell.

He faces a felony charge of aggravated assault on a detention officer in that case.

Duncan is out of the office this week and was not available for comment.