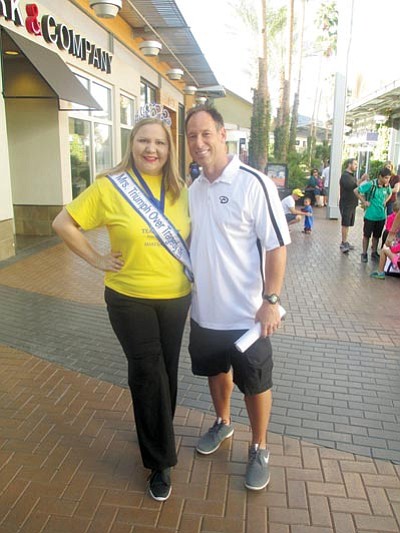 KINGMAN - Unlike many children who suffer at the hands of an abusive parent, Karista Harris did not walk on eggshells at the home she shared with her abusive mother.

"It was more like walking on broken glass on a daily basis," she said.

Longtime residents might recall Karista, the little girl with long hair and a bright smile, who as a child in the 1990s dressed like a pioneer child from the 1800s.

Her last name was Hawk back then - Karista Rose Charity Hawk. She used to pull a wagon up and down the streets of Kingman, handing out religious literature to anyone kind enough to accept her offering.

If residents who were around back then don't remember Karista, they certainly remember her home on Wickieup Avenue. The exterior was painted like an American flag: Red, white and blue, with white stars. There was a replica of the Statue of Liberty displayed prominently in the front window. Scripture was hand-printed on paper and hung everywhere, inside and out.

Before readers reach for a tissue, be advised: This story has a happy ending.

It is, quite literally, a story of one human being's triumph over tragedy.

Karista wants to share her story for a couple of reasons. She wants people who knew her as a child to learn what happened to her after her mother pleaded guilty to two felony counts of child abuse and was sent to prison - and she wants other people, children and adults alike, to understand you do more than simply survive a nightmarish childhood. You can thrive and lead a rich and productive life.

She especially wants the Kingman Police officers and caseworkers who rescued her, along with the neighbors who contacted them on her behalf, to know she turned out OK.

To appreciate how far Karista has come, however, one must understand what she endured.

"I was forced to pretty much care for myself," she said. "I cooked and cleaned. In the meantime, my mother would listen to religious tapes."

Karista's mother was, and perhaps still is, a Branhamite, whose members followed the teachings of the late William Marion Brahham.

"In my house, Branhamites were a cross between Pentecostals and Mennonites," said Karista. "Females couldn't cut their hair. You don't wear jewelry. You wear long, modest clothes and you don't wear makeup."

Her mom, however, allowed an exception to the no makeup rule.

"Once, she slammed my face into a wall," said Karista. "She used Mary Kay makeup to cover the bruises on my face before we went out to do the Lord's work.

"I was the little girl standing on the corner, wearing strange clothes and handing out pamphlets."

A life of terror

Karista spent her childhood in a hellish environment.

She suffered at the hands of a domineering, unstable mother who used frightening physical violence to control her only child. Any transgression, no matter how small, if indeed one occurred at all, resulted in a beating - or worse.

Her first childhood memory isn't of a favorite doll from Santa, a birthday party or any other highlight of a typical child's life. Her first conscious recollection is of suffering pain and soul-piercing fear at the hands of her mother.

"I didn't behave in church," she said. "When we got home, she stripped me naked and beat me until she got tired. She took a break to rest and then started again. I had to stand in a corner while she rested. She didn't stop hitting me until God talked to her."

Karista wasn't misbehaving that day. She was sick and crying, as children are wont to do when they don't feel well.

Karista was three years old when this memory branded itself into her subconscious. Things would only get worse over the next several years.

Her mother was not her only abuser. Some of mom's boyfriends abused her sexually throughout her childhood. None of them were ever held to account.

Her tormenter-in-chief, however, was her mother, who would beat her for the smallest infractions.

"Something as simple as sharpening a pencil wrong or doing the dishes wrong would prompt my mother to go into a rage that would last for hours ... there were times when she would beat me with a belt or tree branch so badly that I couldn't move and would end up bleeding."

Nobody heard my screams

"She had a routine. She purchased several radios and placed them in the rooms of our house. We also lived by the train tracks and trains frequently came through blowing their horns. If I was to be punished, she would tell me to turn all the radios on and then she would wait for a train to come by and then beat me.

"I would try to cover my rear and she would punish me for that. She would whip my arms and then take a figurine or a rock and beat my elbows to force me to stop trying to protect myself.

Karista's mother would not stop the beatings until her only child stopped crying - and not one second before.

Her religious beliefs convinced Karista's mom that her daughter was a child of the devil.

"She said she needed to kill me as that was the only way to get the devil out. At one point, she went into the kitchen and grabbed a butcher knife, pushed me up against the wall and held the blade to my throat."

There were attempts to drown Karista. She remembers the water was so cold in the bathtub because they didn't have a water heater. On another occasion, for the sin of waving to a neighbor, Karista was forced to spend three days in a tiny, dark closet.

Karista began to contemplate suicide at 12, believing death was a far better alternative to her current situation.

She swallowed an entire bottle of aspirin, thinking she would simply go to sleep and die. Instead, she was very sick for the next several days, but her mother refused to take her to the hospital.

"I lost all hope of ever escaping my mother's hand," she said.

Deliverance came in February of 1997.

"I went to our neighbors and showed them the bruises, scars and welts and asked them, 'Is this normal what she's doing to me?'

"The beatings and death threats got worse and I truly believed I would be dead within a year."

On Feb. 19, 1997, while her mom was away, Karista saw a Kingman Police officer visit the neighbors. "My heart was beating so fast and I was scared. He came to my door and told me he was going to be back for me soon.

"Later that day, I saw one cop drive past our house and my heart started beating even faster. Then four cop cars pulled up in front of our house along with several unmarked cars.

"My mother had no idea what was going on and told me to stay in the house. For the first time in my life, I gathered up every single ounce of courage I had and I looked at her, no longer scared of her, and I said, 'Mom, I am sorry. It's over.'"

Karista bolted from the home and walked right past an officer as he walked to her front door. She didn't look back until she was safely inside a caseworker's car.

When she did look back, Karista saw her mother hand the officer one of the two-by-fours she had used to beat her.

"From that time on, I was a ward of the state," she said.

The report compiled by Child Protective Services noted there were substantial injuries to Karista's legs, buttocks, and left arm, where her mother punctured her skin with a safety pin.

The road to normal

For the next five years, Karista lived in four group homes and nine foster homes. She remains friends with some of her foster parents to this day. One set of foster parents, remarkably, was only slightly better than her mother.

In high school in Phoenix she became a bulimic, ran away several times and battled post-traumatic stress.

These days, she is very grateful for the foster care system, especially to those care providers who encouraged her to overcome her past, to fight for her life, to do everything possible to avoid becoming another tragic statistic. She served on the Arizona Foster Care Review Board and many other organizations. She is a college graduate.

Before she realized any of these goals, Karista still had hills to climb and battles to fight before she landed firmly on her feet.

At 18, an early pregnancy followed by a bad marriage to a man who abused her and the son they had in common led to more strife and a divorce. But in 2005, after three years of self-imposed loneliness in an effort to find herself, Karista married a man who nurtures her, encourages her and loves her and her son as his own.

Karista said her mother was diagnosed as a paranoid schizophrenic when she was an inmate in the Arizona Department of Corrections. "Looking back, I can see why she did what she did," said Karista.

The two have not reconciled.

"My relationship with my mom is that she's only my mom in the proverbial sense. She still believes everything she did to me was God's will. She never has apologized and blames it on being a single parent."

Karista isn't too heartbroken over her mom's refusal to admit she was horribly wrong. Instead, she has taken control of her life. She's allowed herself to heal and she has seen therapists who taught her to come to terms with her past and gave her the tools she needs to ensure the insanity ends with her.

"I've broken the chain," she said. "My son is loved and he knows he is loved."

Perhaps the best thing she ever did, however, was write her mother a letter.

"I told her exactly how I felt about her," she said. Writing the letter was cathartic. "Such a weight was off my shoulders."

Last July in Phoenix, Karista was named the 2013 queen of the national Triumph over Tragedy Pageant, which raises awareness for women who were sexually and or physically abused as children.

The pageant and the Tonya Allen Foundation that organizes it encourage women to overcome tragedy in their lives.

"I work hard to use my title and my story to help others. I see the pageant as a stepping stone to reach out to others and let them know there is life after abuse and that they can overcome anything."

An Ultimate Ambassador: Karista Rose Harris inspires and empowers with her past and future
An ode to all moms: Appreciate your mothers every day
Get A Grip: Mom remembers grandmother for Mother's Day
Harvey horror: Shivering girl, 3, clinging to drowned mom
Daughter says she was abused by polygamous sect leader