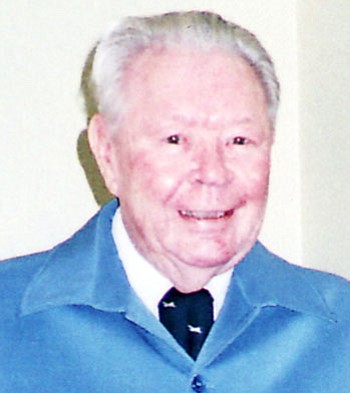 After high school, he entered Youngstown College and enlisted in the Army Air Corps and was called to active duty in March of 1943. As a 2nd lieutenant, he was shipped to England, where he flew 66 combat missions through D-Day, Normandy, France and the Battle of Bastogne in Belgium. He was awarded the Distinguished Flying Cross, 11 Air Medals, four Distinguished Unit Citations, the Victory Medal, and lastly, the Belgian Fourragère for the Battle of Bastogne. He was separated in August 1945 at Kingman Airport to the Reserves. He was discharged in August 1955.

He returned to Wyandotte, Mich., where his parents had moved during the war. He graduated from the University of Michigan in 1944 where he met and married his wife of 66 years, Elaine. Two children, Mark and Gail, soon followed.

He sold insurance and then became interested in the savings and loan industry; he ended up as a vice president of Home Savings and Loan. Upon retirement Bill and Elaine moved to Meadview and stayed for 22 years.

Surviving are his wife, Elaine, and his children, Mark and Gail in California.

He loved to fly, play his ukulele, and sing "My Way."