Long wait - and longer shot - gets elk for Kingman man 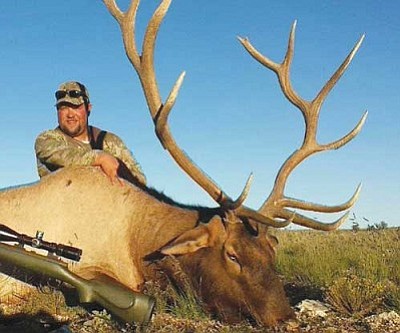 Based on the number of stories I've been hearing, it sounds as if Kingman-area sportsmen had some great fall elk hunts.

One of the exciting adventures was a Unit 10 early rifle bull hunt by Kingman resident Shelby Sinclair.

Sinclair, who had just a few bonus points, really lucked out when he drew one of the 75 early rifle bull tags in Unit 10.

Beating odds of 100 to 1 to draw the tag, Sinclair had his sights on taking one of the many mature bulls that this unit famously produces.

When it comes to hunting, Sinclair is part of a very small group of hunters known as long-range shooters. They use very specialized rifles and other equipment that make them deadly out to 1,000 yards and beyond.

I'll say right here that this type of hunting is not for everyone. In some hunting circles, it's controversial. Some say hunting means getting as close as you can before you take a shot, whether you're using a handgun, muzzleloader rifle or bow and arrow.

But to others like Sinclair, being able to put a deadly bullet on target at ranges that most hunters wouldn't even consider is what they do. It's legal, safe, and the results can't be disputed.

In this case, Sinclair had a rifle built off of a standard Remington Model 700 action in a caliber favored by many long-range hunters. Other improvements included a super-accurate, custom target barrel and a world-class trigger assembly.

Add a pair of binoculars with a built-in rangefinder and a wind meter, and he was almost ready to start hunting.

The caliber is a 6.5 X 284. He uses a 140-grain bullet that is manufactured by Berger Bullets. They are expensive, but worth it, according to Sinclair.

His rifle is topped with a Huskemaw Blue Diamond 5 X 20 power variable scope with custom windage and elevation target turrets.

It has taken Sinclair more than three years to get his custom rifle ready to for a hunt.

He shot literally hundreds of carefully hand-loaded rounds in practice, and his scope is matched up perfectly with the ballistics of his ammunition.

He ranges his target, dials it in on his scope, figures the wind and places the crosshairs exactly where he wants the bullet to go. It may sounds easy, but in reality it takes a long time to do this and it is not an easy task.

On Sinclair's elk hunt, he had help of some friends and his brother, Saki Kogianes. Saki used Sinclair's custom rifle last year to take a mule deer buck in Unit 18B at 680 yards.

They found elk and plenty of them, including lots of bulls. Ryan Chan, who assisted on the hunt as the official videographer, said they probably saw 30 during the first two days of Sinclair's hunt.

But the bulls were constantly fighting, leaving most of them with broken antlers.

On Day 2, they finally found a clean mature bull. The7 X 7 bull wasn't broken up like most of the mature bulls they had been seeing.

The big bull was bedded with a few cows, but he was a long way off - just under 600 yards.

Sinclair knew the shot had to be perfect. He had to wait a long time before he could shoot.

There was wind to consider, as well as other elk around the bull. The bull himself was walking around almost constantly.

Finally, it all came together after three long hours. The final range was determined to be 592 yards.

Sinclair took a breath and slowly squeezed off the shot while Chan videotaped the entire sequence of events.

On the video, it is easy to see the vapor trail of the bullet as it streaked towards the bull at around 2,800 feet per second.

The bullet struck the bull, who went down in a heap, never to rise again.

If you would like to see the actual video of the hunt, it can be seen on Mohave County's only outdoor television show, "Back At Camp," locally on Cable Channel 57.

Show director Dan Hargrave put together a program that features the video footage that Chan took of the hunt. It is amazing footage and a great shot by Sinclair.

The bull scored between 340-350 Boone and Crockett Club points, according to Sinclair, and he is having the bull mounted.

Game: For Sinclairs, it's what's for dinner after filling three tags
Preparation is often the key to success on a hunt
Husband, wife draw out for elk hunt
Young hunter takes big bull on general hunt
2015 a great year for John Beauchamp and friends
Event Calendar