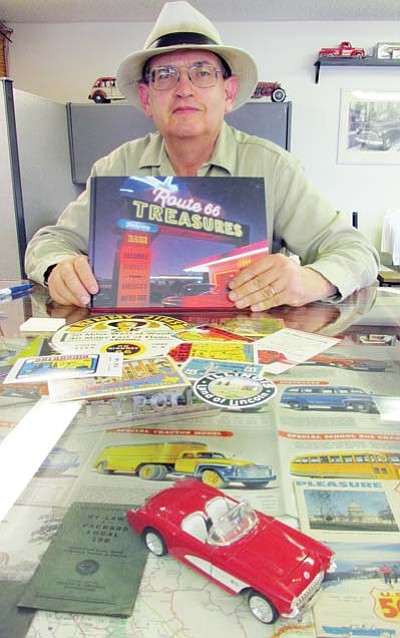 KINGMAN - Local author Jim Hinckley's third book on Route 66 written within the past 18 months takes a look at the publicity and advertising that promoted the Mother Road and businesses that sprang up along it from 1926 to 1984.

The book, "Route 66 Treasures: Featuring Rare Facsimile Memorabilia from America's Mother Road," includes the story of the road's rise and fall, from its heyday as a major cross-country thoroughfare to its displacement by the U.S. interstate system in the 1950s. The book features 15 pieces of removable facsimile memorabilia, including diner menus, cocktail napkins, paper coasters, window decals, postcards and brochures.

"This book is a time capsule of Route 66," said Hinckley. "I wanted to show how the highway has evolved and is a mirror reflecting changes in society. I take my task of preserving the history of Route 66 very seriously, and with everything I write, I try to add depth and context. People see Route 66 as tail fins and neon, but it's much more than that. This book gives a snapshot of what made this highway famous."

Hinckley began his writing career penning features for car magazines.. His car-related books are "Checker Cab Company Photo History" and "The Big Book of Car Culture." Since 2006, Hinckley has branched out, writing "Backroads of Arizona," "Route 66 Backroads," "Greetings from Route 66," "Ghost Towns of the Southwest" and "The Route 66 Encyclopedia." ,

The author recently finished a companion to the encyclopedia, called "Route 66 Historic Atlas," which is due out in 2014. It will include a foldout map of every state along Route 66 as well as details on crime scenes and disasters along the highway, film locations and celebrity associations, pre-1926 historic sites and military bases and activity.

And he has completed a Route 66 travel guide, titled "Travel Route 66," that features interesting sites a mile or two off Route 66, from The Cave Restaurant and Resort in Richland, Mo., which is located inside a cave, to Amboy Crater, an extinct volcano in California. The book will be released in March..

All of Hinckley's travel books are published by Voyageur Press.