Rain damages Golden Valley roads, leaving some residents on their own 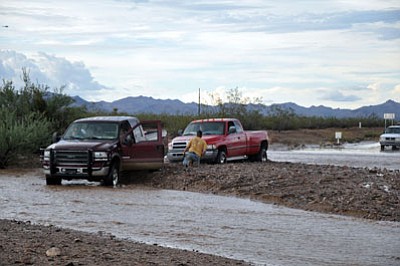 BUTCH MERIWETHER/Courtesy<BR> A Golden Valley resident hooks a chain to a hook up to a Dodge pickup that got stuck when the driver attempted to drive through a flooded area of Estrella Road. It is estimated that more than 30 vehicles got stuck attempting to cross various flooded roads during a recent storm that hit Golden Valley.

KINGMAN - Golden Valley resident Darlene Moore's house stayed high and dry during Friday's monsoon storms, but the road to her house is another matter.

Storm runoff flooded washes to the north and south of her home on Carrizo Road, carving deep grooves and holes that would make it difficult for even a four-wheel-drive vehicle to make it through, Moore said.

"People can't get out to get their mail. If someone comes through here at night, they're going to be in trouble," she said. "I've never seen the roads this bad in all the years I've been here."

Moore moved to Golden Valley in 2007. She said she currently has to cut across a field get to the next road over so that she can get to the store or the doctor's. She also takes care of her husband and her mother.

"The county doesn't maintain these roads and they won't let us hire someone to take care of them either," she said. "What happens if someone has to call 911? How are emergency vehicles supposed to get through that?"

Golden Valley Assistant Fire Chief Ted Martin said damage to the roads did cause some delays in responding to emergencies.

"We had to take some detours but that didn't stop us from responding," he said.

The fire district also pulled out four people out of washes on Friday after they got stuck because of the rushing water, Martin said.

The Mohave County Sheriff's Office Search and Rescue High Water Team and the Arizona Department of Public Safety Ranger helicopter were also in the area on the lookout for stranded motorists.

Moore pointed out that both of those sections are north of Highway 68. Her section of Carrizo Road is in the south end of the valley near Shinarump Drive.

Latsoki said property owners can petition the county to bring their road into the county's tertiary road maintenance program, but first the road must be brought up to county standards. Those standards include a dedicated public road right of way that is at least 30 feet wide with a 24-foot travel lane and two-foot wide shoulders on either side.

Moore said she and her neighbors did petition the county about three years ago to have the road accepted into the program, but were told that the road surface needed to be sloped so that water would run down the shoulders instead of in the middle of the road.

Another option, Latoski said, is to hire someone to grade the road.

A county ordinance allows property owners to hire someone to grade their road or grade it themselves if they wish, he said.

"There's a lot of people in Golden Valley who hire someone to grade their road," Latoski said.

Moore said she asked about hiring someone to grade the road three years ago and was told that she couldn't hire someone and if she did she would be fined. However, since they are the property owners, they can grade it themselves.

"When I asked how they expected me to do that, their comment to me was, 'We don't make people live out there," Moore said. "My comment to them should have been, 'Well, you have no problem taking my taxes.'"

Her husband currently tries to keep the road clear with a small tractor they own.

County property taxes do not go toward road maintenance, Latoski said. The county uses Highway User Revenue Funds from the state to fix more than 2,000 miles of county roads.

Moore pointed out that Highway User Revenue Funds are collected from the state gas, diesel and license taxes, which she pays in order to license and drive her vehicle on county roads.