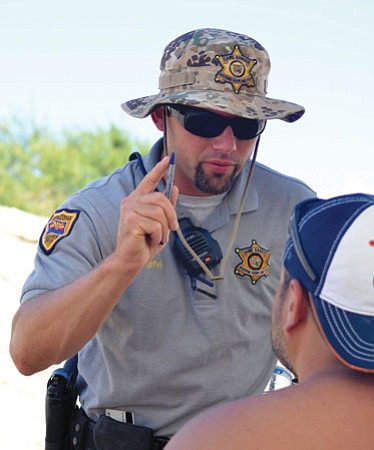 KINGMAN - The longest arm of the law on Mohave County's waterways is Luke Apfel, who was recently awarded the Mothers Against Drunk Driving Operating Under the Influence Officer of the Year Award.

"It's an honor," said Apfel, a wildlife manager with the Arizona Game and Fish Department's Region 3 office in Kingman. "There's a lot of satisfaction in getting impaired operators off the water. I consider every such arrest as a life saved. These same people operating under the influence are often operating a vehicle when they come off the water, as well."

Alcohol use is the top contributing factor in fatal boating accidents, according to the U.S. Coast Guard. As the region's waterways have become more congested, law enforcement from multiple local, state and federal agencies has stepped up patrols. Apfel has been involved in many checkpoints the past two years, according to Zen Mocarski, the Region 3 public information officer.

Based out of Bullhead City since January 2012, Apfel has been one of the department's top OUI officers. He made nine arrests last year and has eight so far in 2013.

"Luke is one of the most proficient OUI investigators in the Kingman regional area," said Velma Holt-Buhr, the west sector supervisor in Region 3. She said Apfel often lends his knowledge and expertise to other officers investigating impaired boat operators.