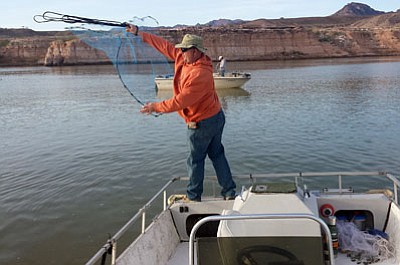 DON MARTIN/Special to the Miner<BR> Johnnie Hoeft demonstrates the correct technique to use when casting a net to catch gizzard shad on Lake Mead.

It started with an invitation from a couple of members of the Nevada Striper Club after I inquired about the use of gizzard shad on Lake Mead to catch striped bass: "Why don't you and Johnnie come on down and we'll show you how to do it?"

That came from NSC member Toby Chandler, who is one of the members of a southern Nevada striper fishing club and an angler who really knows his stuff.

Case in point - last year, at Stripe-R-Rama, Chandler and his partner Warren Wagner came in second place and had the tournament's big striper, which weighed 7 pounds. They missed winning the tournament by just two ounces.

So last weekend, local sportsman and Stripe-R Rama tournament director Johnnie Hoeft and I headed up to Boulder Harbor to meet Chandler and Wagner for a lesson on catching this non-native baitfish.

We brought my jet boat and a couple of casting nets and an ice chest to bring home our catch.

It was warm and sunny with not much wind when we headed out of Boulder Harbor.

Our destination was the back of a long channel where water constantly flows into the lake. The water comes from Lake Las Vegas, a large man-made lake that is part of a very exclusive housing development a few miles away from Lake Mead.

After a 20-minute boat ride, we arrived in the area. To my surprise, there were about 20 boats there.

Chandler said most of the people were fishing for stripers, but way in the back of the channel near the shoreline were other boats and anglers who didn't have any fishing poles.

The sights and sounds of anglers casting nets into the water quickly got my attention.

After a short indoctrination by Chandler on how to throw a 4-foot casting net - something I never did master - Hoeft and I were off.

Chandler was the net man, while Wagner ran the boat.

Hoeft did great; he was able to toss the lead-weighted net properly and he started catching fish right away.

But his first catches weren't the shad we were after. No, he caught another non-native fish that is sought out by anglers in Lake Mead - tilapia!

These were not little fish. These pie-plate-sized fish weighed between 2 and 3 pounds each. He also snagged a huge carp.

Hoeft obviously had the technique down and he finally caught some gizzards. But it was Chandler who was bringing in a lot of both gizzard shad and threadfin shad. Plus, he caught a giant tilapia that weighed 4.2 pounds.

I, meanwhile, just couldn't get the hang of throwing that net.

I tossed my brand-new net for more than three hours before I caught my one and only baitfish, a threadfin about 3 inches long. I was, however, successful in bringing in just about every stick resting on the bottom of the lake.

Later in the morning after the wind came up we tried our hand at fishing with the bait they had caught.

Chandler and Wagner got three feisty stripers, while Hoeft and I only managed to catch quagga mussels.

I found out that throwing a casting net isn't easy and obviously takes some time and skill to master.

My plan, if I go back, is to take someone like Hoeft who knows how to throw a net, and I'll just run the boat.

I can't wait to try the shad we caught for stripers and catfish when I start fishing out of South Cove in about a month.

The large shad were filleted and then cut up into small pieces. (The smaller ones, up to four inches in length, can and will be used whole.)

Chandler and Wagner are two great guys who readily shared their "secrets" of catching bait. We had a lot of fun and enjoyed our time with them on the lake.

Sometimes catching bait can be just as fun as fishing for stripers.