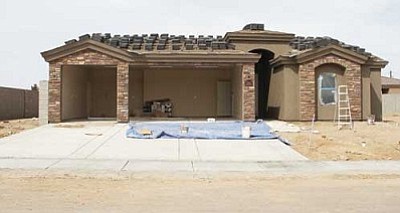 JC AMBERLYN/Miner<br /><br /><!-- 1upcrlf2 -->A home under construction on Robert Mitchum Drive in the Walleck Ranch subdivision, one of the more popular neighborhoods in Kingman.

"Walleck Ranch is the only master planned subdivision in the center of Kingman," said John Cantrell, owner of Cantrell Development Inc. and Legacy Realty. "We're close to shopping, the hospital. This is a great location."

There's also the Walleck Ranch neighborhood park on Willow Street and a walking path the city put in that runs the length of the subdivision and beyond.

Schools and churches are nearby.

"This is a perfect location," said Cantrell.

That's a sentiment shared by David Queen of The Queen Team at Keller Williams Realty Inc.

"The central location is what makes Walleck Ranch and Legacy unique," said Queen. "A lot of people from the hospital bought homes there. It just made sense because they could get there fast in an emergency."

Walleck Ranch spans between Kino Avenue and Gordon Drive, and from Willow Street to near the back of the Safeway Plaza and Home Depot.

Legacy runs between Kino and almost to Gordon, and from Willow to where it buts up to another subdivision.

There are codes, covenants and regulations that the more than 200 homeowners live under, but there is not a homeowner's association board. There are no fees or dues.

Instead, Cantrell and others serve on an architectural committee that sends gently worded letters to homeowners deemed to be in violation of the rules.

The rules specify what color a home's exterior can be painted, recreational vehicles must be parked behind a gate and people can't work on their vehicles if they are parked in front.

Cantrell believes the codes and regulations are a plus.

"Walleck Ranch is considered one of the premier communities in Kingman and that's because of the pride of ownership people have that live there. CC&Rs help, and that's what people from Phoenix and California expect. They're used to it."

Linn Construction developed Walleck Ranch and built homes there until 2011, when Cantrell took over. Linn is credited with building about 800 homes in the Kingman area over more than three decades.

Since Linn departed, Cantrell has finished 15 homes on Alan Ladd Drive - filling every lot - and is now building on Robert Mitchum Drive, as well as projects down the street at Legacy.

The chief differences between the two subdivisions are square footage and, therefore, cost.

Cantrell said the minimum square footage in Walleck Ranch is 1,450, with homes constructed up to 2,100 square feet.

Cantrell, a 2002 Kingman High graduate, worked for his contractor father after high school. His father learned the trade from Cantrell's grandfather.

"Every developer has his own unique way of doing things," said Cantrell. "We do more of a custom home. We try to give the customer a new experience. We have a 3-D CAD program that lets them see their home in three dimensions.

As of March 25, there were 13 active listings in Walleck Ranch. Inventory, said Queen from Keller Williams, is low throughout the city and that means the market is slow.

The good news, said Queen, is that home values are on the way up and homes that do go on the market move fast.

Queen said Walleck Ranch is a very clean, family oriented subdivision with a mix of retirees.

"You can walk to do your shopping," he said. "Everybody takes real good care of their homes and yards."