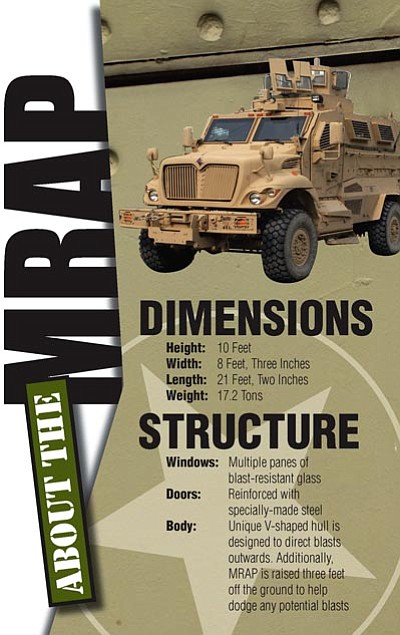 KINGMAN - The Kingman Police Department could become the owner of a Mine Resistant Ambush Protected vehicle from the Defense Department - gratis.

Dozens of law enforcement agencies have obtained the armored fighting vehicles since they became available last fall through the so-called 1033 Program. About 700 more have been requested out of about 13,000 that are available.

Known by the acronym MRAP, the vehicles were designed to survive roadside bombs and improvised explosive devices in Iraq and Afghanistan, as well as protect against ambush.

They replaced many of the more mobile but less-protected Humvees.

According to today's City Council agenda - the item is listed on the consent agenda and could be approved with no discussion - the MRAP will be used for "tactical, bomb and hostage situations, search warrant executions and critical incident rescue operations of both civilian and sworn personnel."

The rebuilt MRAP cost American taxpayers $733,000. The only cost to the city is to pay to transport the MRAP to Kingman and to equip and outfit the vehicle to meet law enforcement purposes.

DeVries said drug seizure money will be used to complete the job.

However, critics contend the vehicles are expensive to maintain. Their heavy weight - more than 17 tons - means gas will be guzzled to the tune of about five miles a gallon and they were not built to last, which is why maintenance is expensive.

The American Civil Liberties Union has formally protested the Department of Defense program, arguing it promotes the increasing militarization of police departments.

It will replace the department's current armored vehicle, which Chief Robert DeVries characterized as "outdated and high maintenance."

While the MRAP was designed to fight wars, federal and state law enforcement agencies have used them for rescue operations and to fight drug smugglers.

MRAPS sit about three feet off the ground and can drive through relatively high water and snow, seat nine and are essentially blastproof.