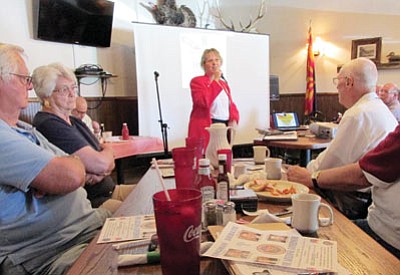 KINGMAN - The title on the introductory PowerPoint slide in Diane Douglas' presentation about Common Core said it all.

Douglas spoke Monday before the Kingman Republican Men's Club on what she called "The Unconstitutional Federal Takeover of Local Education."

She was scheduled to join John Huppenthal, state Superintendent of Public Instruction, as the two candidates for the office squared off over the controversial program.

Huppenthal, who had committed to attending the meeting, unexpectedly cancelled Friday afternoon, citing a family emergency.

A call to his Phoenix office Monday was not returned. Huppenthal, the incumbent since 2011, supports Common Core, which the state renamed Arizona's College and Career Ready Standards in September to avoid negative publicity.

"My vision for Arizona is to stop Common Core here," said Douglas, a member of the Peoria Unified School District governing board from 2005 to 2012.

"We need to get our schools back to a knowledge-rich curriculum. We want our children to be content masters. My goal is to take back education for the children and parents in Arizona."

When asked how she would accomplish that if she were elected, Douglas said she wished she'd get a magic wand that could erase the situation when she took office.

Instead, said Douglas, it will take hard work to convince voters, as well as electing a governor opposed to Common Core who will appoint likeminded members to the state Board of Education.

Common Core is a national educational system that was implemented last year in Arizona. Its standards were created by a consortium of teachers, business leaders and education experts from 46 states, including Arizona, to toughen up standards for math, English and writing from kindergarten through 12th grade.