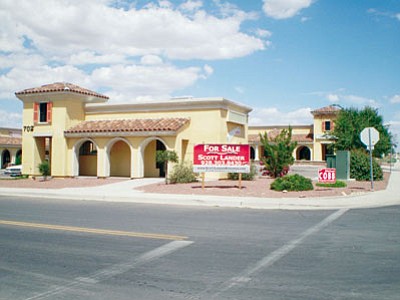 HUBBLE RAY SMITH/Miner<BR> The Grand Tuscan Center has a classic exterior – and only one tenant.

KINGMAN - Judy Reese doesn't mind being the sole tenant in the Grand Tuscan Center that's for sale at Eastern Street and Southern Avenue, just down the street from Hualapai Elementary School.

There's plenty of parking available for her Kingman Dance Factory and the building's owner worked with her to lower the rent after other businesses packed up and left.

Reese leased about 3,000 square feet for her dance studio when the retail center was built in 2008 and watched businesses such as Lombardo's Restaurant, Zen Salon and Day Spa, and Papa's Ice Cream Parlor come and go.

The center has gone through three owners and the location - a few blocks off Hualapai Mountain Road - isn't conducive for those types of businesses, she said.

"Being the only tenant is fine," Reese said. "It doesn't affect our business because of the nature of our business."

Kingman real estate broker Scott Lander has the 12,000-square-foot building listed for $1.3 million and said he's getting some interest in it. He already sold a sister building in the center that had never been leased and was being vandalized by kids throwing rocks through the windows.

A taco shop is coming to the freestanding corner pad where the ice cream parlor failed, Lander said.

He disagreed with Reese about the location factor. Sure, it's off the main road, but it's also surrounded by 6,000 relatively new homes and above-average median income households, he said.

"It boils down to the economy at first," Lander said. "No. 2, the owner was from out of town and never adjusted the (rent) price to reflect the economy. He was always over $1 a foot."

As older parts of Kingman struggled with retail vacancy, developers went forward with newer projects such as those along Hualapai Mountain Road.

Macrae Glass, a local chiropractor, wanted his office closer to home, so he contracted T.R. Orr to build a mixed-use office and retail development in 2007. Subway, Verizon and DMR Computers are among his tenants in two 7,600-square-foot buildings at 2505-2535 Hualapai Mountain Road.

Glass said most of his tenants came to him, though he did "plant a seed" with Subway's franchise owner in Kingman when he thought about building the center. Da Shaka Shack, a Hawaiian barbecue, recently negotiated a lease and is working on tenant improvements to open soon.

Glass has a 1,950-square-foot unit for lease and he's asking for rent upward of $1 a square foot, depending on the tenant's creditworthiness, term of the lease, tenant improvements and other factors. Taxes and insurance cost him 18 cents a foot, he said.

"It's simply geographic," Glass said. "People want to be close to home. Time is valuable."

T.R. Orr is working on rehabilitating an end building in the old TG&Y shopping center on Stockton Hill Road. Workers are tearing down walls and replumbing the 6,000-square-foot former Dairy Queen in preparation for lease after it sat empty for years.

Project manager Elton Edwards said the building's owners have no tenants in tow, but they're giving it a "facelift" on the outside and getting the building ready to be insulated and equipped with new electrical and plumbing fixtures.

"We've found that strip malls are beefing up their facades and doing things to be more attractive to tenant occupants," said Jim Durham, commercial broker with Coldwell Banker in Lake Havasu City. "You've got to be competitive today and have attractive amenities."

Lander expects to see improvement in retail center occupancy as the economy continues to recover and as more people move into the area. Home prices have increased about 7 percent from a year ago, and as the residential market improves, retail will follow, the real estate agent said.

"I think commercial is getting out of its funk, just getting past the bottom. It's still struggling, but it's gotten better than it was a couple or three years ago," Lander said.